Changing behaviour by traditional climate offenders like China and India might compensate for lower standards in the United States, says a consortium of environmental analysts. 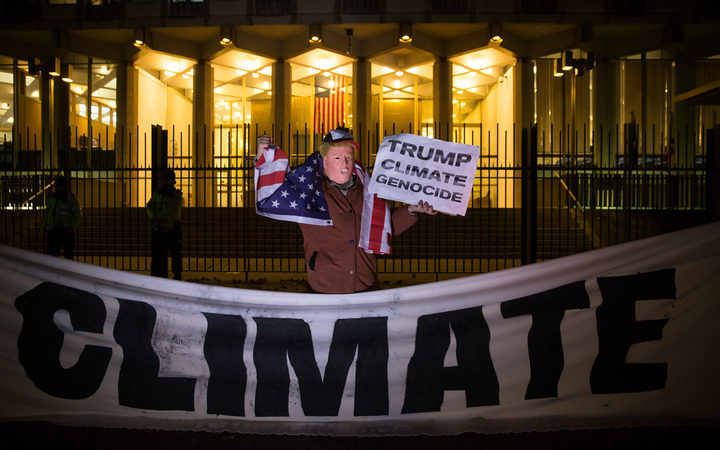 A man wearing a mask portraying US president Donald Trump protests his vow to withdraw the US from the Paris Climate Accord outside the US Embassy in central London. Photo: Daniel LEAL-OLIVAS / AFP

Climate Action Tracker, an umbrella group for three climate think tanks, said sweeping policy changes by US President Donald Trump would flatten out a recent US trend of falling greenhouse gas emissions, unless cancelled out by other events.

"The highly adverse rollbacks of US climate policies by the Trump Administration, if fully implemented and not compensated by other actors, are projected to flatten US emissions instead of continuing on a downward trend," said Professor Niklas Höhne, from one of the think tanks, NewClimate Institute.

Based on current policies, Climate Action Tracker has reduced its assessment of the United States from "Medium" to "Inadequate".

However, policy changes in China and India could soften that impact.

A report by the group said positive developments on coal use in China and India were likely to reduce global carbon emissions growth by two to three billion tonnes by 2030, compared with forecasts made a year ago.

It said China's coal consumption had declined over three consecutive years, and this process was expected to continue.

India had stated that planned coal-fired power plants may not be needed.

"Five years ago, the idea of either China or India stopping - or even slowing - coal use was considered an insurmountable hurdle," said Bill Hare of Climate Analytics, another member of Climate Action Tracker.

"That is because coal-fired power plants were thought by many to be necessary to satisfy the energy demands of these countries."

Meanwhile the Trump Administration remains undecided on its overall position on the Paris Agreement.