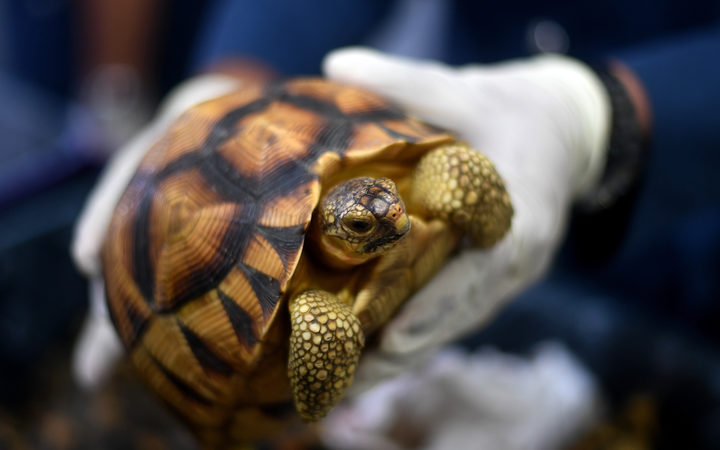 A seized endangered ploughshare tortoise following a press conference at the Customs Complex in Sepang on Monday. Photo: AFP

The tortoises had been flown into the country from Madagascar on 14 May, and were documented in the flight's manifest as stones, Kuala Lumpur International Airport Customs deputy director Abdul Wahid Sulong told reporters.

The tortoises were valued at 1.2 million Malaysian ringgit ($US277,000), and the local address to which they were shipped was found to be false, he added.

Ploughshare tortoises are endemic to Madagascar, and are listed as critically endangered on International Union for Conservation of Nature's Red List of Threatened Species due to poaching.

Malaysia has been singled out by wildlife conservationists as a transit point for the illegal trafficking of endangered species to other Asian countries.

Earlier this month, Malaysia seized more than $US2 million worth of scales from pangolins, the world's most poached animal, at Kuala Lumpur Airport in the largest haul seen in the country