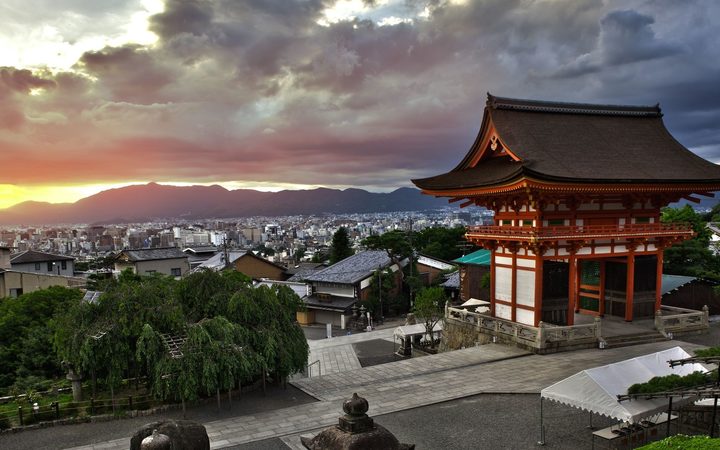 The posters around Kyoto were warmly welcomed by some, but touched a nerve among those concerned about rising right-wing nationalism.

But now there's a twist, as it has emerged that the model they feature is actually Chinese.

Kyoto residents began noticing the posters around the city earlier this month. They feature a girl smiling in front of the Japanese flag.

"I'm glad to be Japanese. Raise the Hinomaru with pride in your heart," the poster states, using the Japanese word for the flag.

On the surface the poster appears to promote benign patriotism. As one person said on Twitter: "What's wrong with being proud of your country in your country?"

But others saw it as unsettling nationalism. In recent years, right-wing conservative groups have become more vocal, advocating a move away from post-war pacifism and a revisionist take on Japan's wartime history. 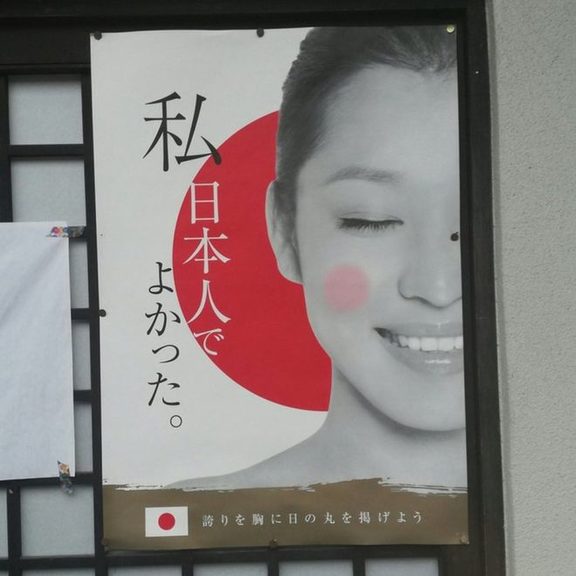 The poster, which has been put up in many places around Kyoto, says "I'm glad to be Japanese. Raise the Hinomaru (flag) with pride in your heart," - but the image used is of a Chinese model, and from a Beijing production company. Photo: Supplied via BBC

Another said foreign visitors might also be made to feel unwelcome, saying: "It's a very disturbing message that the posters are transmitting."

But it turns out the image is a modified version of this Getty Images photo produced in Beijing and tagged "Chinese ethnicity".

That matters in Japan, because the rise of nationalism and World War II revisionism has been met with strenuous objections in China, which suffered greatly under Japanese occupation.

The hashtag #YourPatriotismWasMadeInChina has been doing the rounds in Japan.

"This reminds of me of all those MAGA (Make America Great Again) Trump hats made in China," said one person. "China is supporting all sorts of patriots around the world!"

When asked about the picture's use, Blue Jean Images, the Beijing-based company which produced the original photo, said: "We have no comment as this is a very sensitive issue."

They confirmed to the BBC the model was Chinese and that the picture was taken in 2009.

At first, there was no clue who was behind the posters, which have no information to identifies the publishers.

Earlier this week however, Huffington Post Japan reported that Jinja Honcho, the national association of Shinto shrines, had produced them.

Shintoism, the indigenous religion which is an intrinsic part of Japan's cultural identity, has had a revival in recent decades which is closely linked with the nationalistic movement.

They had first produced that particular poster in 2011 and distributed 60,000 copies to shrines across the country.

The Jinja Honcho told Huffington Post Japan the fact the model was Chinese was "not a problem", as the poster "does not specifically state that the featured person is a Japanese person".

The discovery has been greeted with disbelief and amusement in Japan, and also in China.

One Twitter user said the "self-styled anti-bigotry critics" who defended it were ignoring the feelings of Japanese people with foreign roots.

On the popular Chinese microblogging network Sina Weibo, one user posted the inflammatory joke: "Surely this proves that Japanese people are actually Chinese?"