Dozens of miners and rescuers have been killed after a explosion at a coal mine in northern Iran, reports say. 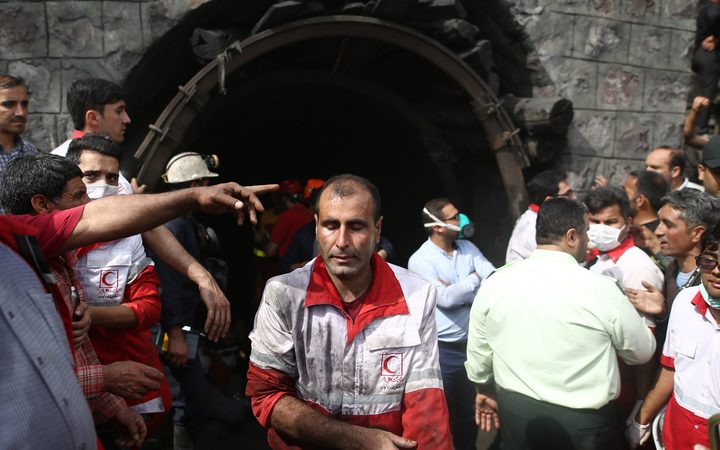 Rescue workers gather at the scene following an explosion in an Iran coal mine. Photo: AFP

Two people are reported to have been killed and 25 others wounded by the blast.

The IRTV1 channel said that there had been no news on the miners' conditions.

They are believed to be 1800m underground at the Zemestan-Yurt mine, near Azadshahr in the northern province of Golestan.

There are reports they have limited space and are in danger from volatile gasses. Earlier reports said that at least 50 miners were buried by the blast.

It remains unclear exactly how many miners are affected - some online sources say that there are in fact only between 24 and 26 miners trapped.

One emergency services spokesman said that 16 people had managed to escape.

The explosion may have been caused by someone attempting to start a lorry engine, according to some reports.

President Hassan Rouhani has been criticised by conservative rivals and the media for what they describe as his government's "slow response" to the disaster.

He has sent Labour Minister Ali Rabei to the scene.

The incident could have political consequences for the government - coming less than a month before the 19 May presidential election in which Mr Rouhani is facing a strong challenge from conservative candidate Ebrahim Raisi.

The rescue operation has reportedly been hampered by concerns about gas in the tunnels.

Emergency teams and sniffer dogs have been dispatched to the mine and work to remove the rubble has begun.

Hamidreza Montazeri, deputy head of the provincial emergency services, told PressTV that 25 people involved in the rescue had been taken for treatment after inhaling gas.

State media reported that the mine employed some 500 workers and that the explosion happened during a change of shift.