United Airlines is facing another PR nightmare, after the death of a giant rabbit that was being transported on one of its planes. 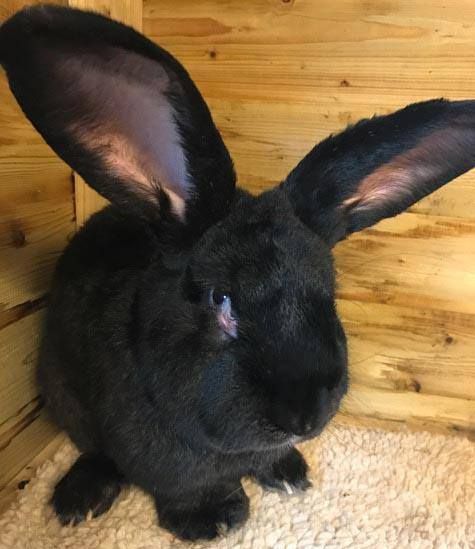 Simon the rabbit was on track to become the biggest bunny in the world, report UK media. Photo: Supplied

The 90cm-long bunny, called Simon, was found dead in the cargo hold when the flight arrived at Chicago's O'Hare airport from London Heathrow.

The airline has had a torrid few weeks of bad publicity, with a passenger left injured after he was forcibly removed from an overbooked flight in Chicago.

Reports in UK media say the 10 month-old giant rabbit was being delivered to a new "celebrity" owner.

United said it was "saddened" by Simon's death.

Animals dying on planes is rare but not unheard of.

US Department of Transportation figures show that in 2015, the most recent data available, US airlines reported 35 animal deaths.

Of those, 14 deaths were on United flights, with a further nine creatures injured. Across the year, United carried 97,156 animals, meaning there were 2.37 incidents for every 10,000 animals transported during the period.

That was the highest rate seen on any US airline, according to the data.

In a statement sent to the BBC, United said: "We were saddened to hear this news. The safety and well-being of all the animals that travel with us is of the utmost importance to United Airlines and our PetSafe team.

"We have been in contact with our customer and have offered assistance. We are reviewing this matter."

The Sun newspaper reported that Simon was the 10-month-old son of the world's largest rabbit - a 1.3m-long continental giant rabbit called Darius - and was expected to have grown larger than his father.

Owner Annette Edwards told the paper: "Simon had a vet's check-up three hours before the flight and was fit as a fiddle.

"Something very strange has happened and I want to know what. I've sent rabbits all around the world and nothing like this has happened before."

United has been in damage control mode this month after passenger Dr David Dao lost two front teeth and suffered a broken nose when he was forcibly removed from an overbooked flight at Chicago's O'Hare airport.

The incident caused outrage and widespread condemnation of the airline after footage was shared and watched by millions of people online.

The firm has apologised and reviewed its policies on overbooking planes.

In late March, United was heavily criticised on social media after two girls were reportedly barred from flying for wearing leggings on a flight from Denver to Minneapolis.

United said the girls were travelling on a special pass, for employees and their guests, which has a dress code.