UK Prime Minister Theresa May has signed the letter that will formally begin the UK's departure from the European Union. 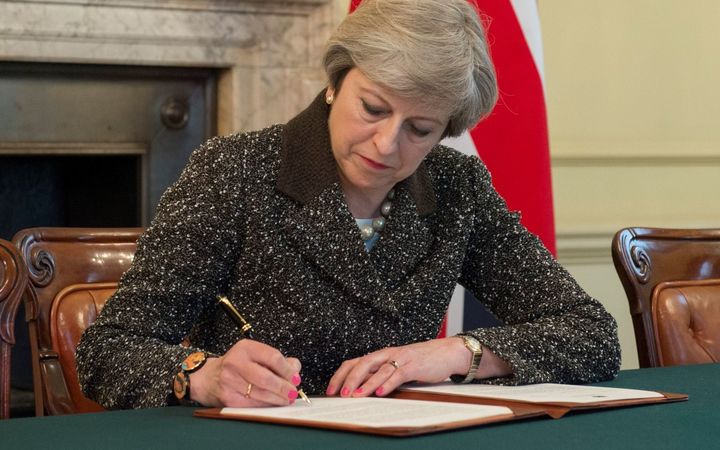 Giving official notice under Article 50 of the Lisbon Treaty, it will be delivered to European Council president Donald Tusk at about 12.30am Thursday (New Zealand time).

It follows June's referendum, which resulted in a vote to leave the EU.

Mrs May's letter will be delivered by the British ambassador to the EU, Sir Tim Barrow.

The prime minister, who will chair a Cabinet meeting in the morning, will then make a statement to MPs confirming the countdown to the UK's departure from the EU is under way.

She will promise to "represent every person in the whole United Kingdom" during the negotiations - including EU nationals, whose status after Brexit has yet to be settled.

Labour leader Jeremy Corbyn said his party respected the decision to leave the EU and would hold the government to account "every step of the way".

"Britain is going to change as a result. The question is how."

Mr Corbyn warned it would be "a national failure of historic proportions" if Mrs May did not secure protection for workers' rights.

Article 50 gives both sides two years to reach agreement so, unless both sides agree to extend the deadline for talks, the UK will leave on 29 March 2019.

Negotiations are expected to begin in mid-May.

The Liberal Democrats said Mrs May was "pulling the trigger that will set in motion a chain of events which will change this country forever, and doing so without a proper plan", but the Leave Means Leave campaign congratulated her on sticking to her timetable of invoking Article 50 before the end of March.