US President Donald Trump has asked House Speaker Paul Ryan to pull his healthcare bill, which would have overturned the Affordable Care Act. 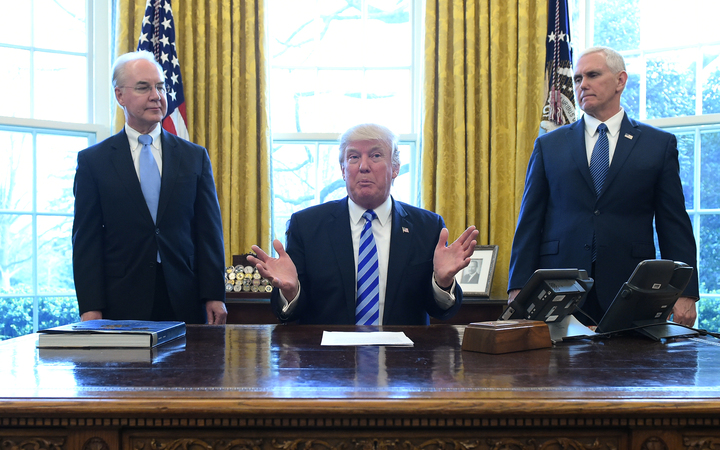 US President Donald Trump, with Vice President Mike Pence and Health and Human Services Secretary Tom Price, speaks from the Oval Office of the White House in Washington DC after his healthcare bill was pulled. Photo: AFP

Donald Trump's demanded high-stakes vote on overhauling the US healthcare system, dismantling the Affordable Care Act known as "Obamacare" had tentatively been set to take place at 4.45pm on Friday (8.45am Saturday NZ time).

However, Mr Trump told House Speaker Paul Ryan to pull the bill after it became apparent it would not get the minimum of 215 Republican votes needed.

Mr Trump spoke to media after the decision and said he expected Obamacare to "explode", and that it was now purely a Democrat system and a Democrat problem.

"Things are going to happen to Obamacare, there's not much you can do about it," he said. "As we got closer and closer (to the vote) people kept saying how good it was and now we're back to reality."

"I honestly believe the democrats will come to us and say 'let's get together and get a really great plan or bill."

"I think we have to let Obamacare go its way for a while and see how things go."

He said he was disappointed and a little surprised the Republicans could not secure enough votes, and that he thought they had only been 10 or 15 votes away from being able to pass it.

Mr Ryan said at a press conference it was a setback, but it was a dissapointing day for the Republicans.

"We came really close today and we pulled up short. I spoke to the President just a little while ago. I told him I think the best thing I think to do is to pull this bill and he agreed with that decision." 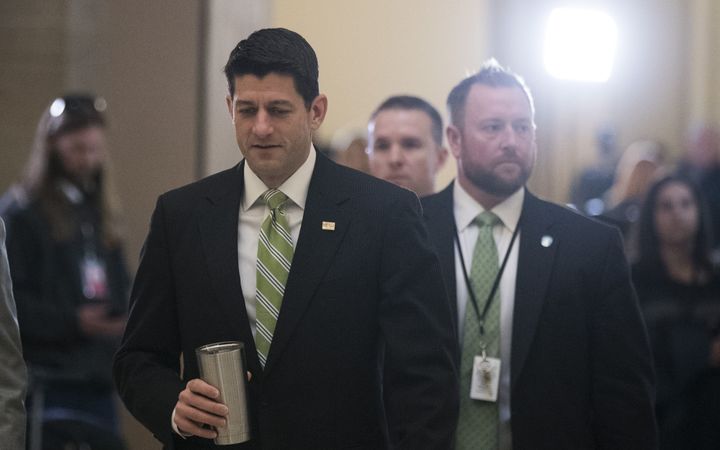 Speaker of the House Paul Ryan (R-WI) walks to his office after bringing the House into session on Friday. Photo: AFP

"This is a setback and no two ways about it. But it is not the end of the story because I know that every man and woman in this conference is now more more than ever to step up our game, to deliver on our promises."

He said he did not think the bill or anything close to it would now be able to pass.

He said he was proud of the bill that was produced and that it would have made a difference to those who were struggling under Obamacare.

He said it would make the Republican plans for tax reform more difficult but they would be pushing ahead.

Democrat minority leader of the House Nancy Pelosi said it was a great day for the country and a victory for the American people.

The Washington Post reported Mr Trump wanted to see if Democrats would come to him to work on healthcare.

The withdrawal is seen as a huge blow to Mr Trump.

Mr Ryan was earlier reported to have told Mr Trump there were not enough votes to pass the bill.

The network said Mr Ryan, who was meeting with Mr Trump at the White House, was seeking guidance from him about possible next steps.

Republican leaders had been planning a vote later on Friday on the measure, which seeks to dismantle Obamacare.

Further complicating matters, Republican chairman of the House Appropriations Committee Rodney Frelinghuysen said he could not support the bill, a major blow to Republican efforts to pass the legislation.

"Unfortunately, the legislation before the House today is currently unacceptable as it would place significant new costs and barriers to care on my constituents in New Jersey," said

"In addition to the loss of Medicaid coverage for so many people in my Medicaid-dependent state, the denial of essential health benefits in the individual market raise serious coverage and cost issues."

The showdown on the House of Representatives floor follows Mr Trump's decision to cut off negotiations to shore up support inside his own party, with moderates and the most conservative lawmakers balking.

The vote was delayed on Thursday, prompting Mr Trump to give Republicans an ultimatum that if they did not vote for the bill the Affordable Care Act would remain in place. 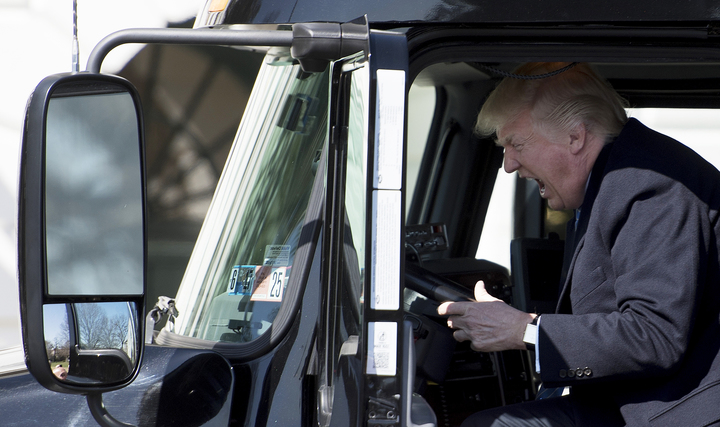 US President Donald Trump sits in the drivers seat of a semi-truck as he welcomes truckers and CEOs to the White House in Washington, DC, to discuss healthcare. Photo: AFP

The bill was the first foray into legislation for Mr Trump, who took office on 20 January with no political experience.

Replacing Obama's signature health care plan was a key campaign pledge for Mr Trump and Republicans, who view it as overly intrusive and expensive.

However, the vote seemed doomed to fail. Republicans could afford to lose only 21 votes and CBS reported at least 35 Republicans still planning to vote against the bill.

Even had the legislation passed in the House, it faced an uncertain future in the Senate, where Republicans expressed misgivings.

The president and House Republican leaders cannot afford to lose many votes in their own party because Democrats are unified in opposition, saying the bill would take away medical insurance from millions of Americans and leave the more than $3 trillion US healthcare system in disarray.

Republicans control Congress and the White House but have deep divisions over the first major legislative test since Trump became president. The vote looked to be a cliffhanger.

Representative Rodney Davis, a member of the House Republican team trying to win passage, said the bill was still short of the needed votes, telling MSNBC the "next few votes" would be the toughest to secure.

The back-and-forth over the bill has led to some of the choppiest trading Wall Street has seen since Mr Trump's election in November. Investors had grown worried that a failure of the legislation would damage prospects for Mr Trump's pro-growth agenda items, tax reform and stimulus, which led this week to the biggest daily drop US stocks have seen since the election.