Hoax threats against Jewish community centres - including in New Zealand - have led to the arrest of teenager, but his defence says he has behavioural problems stemming from a growth. 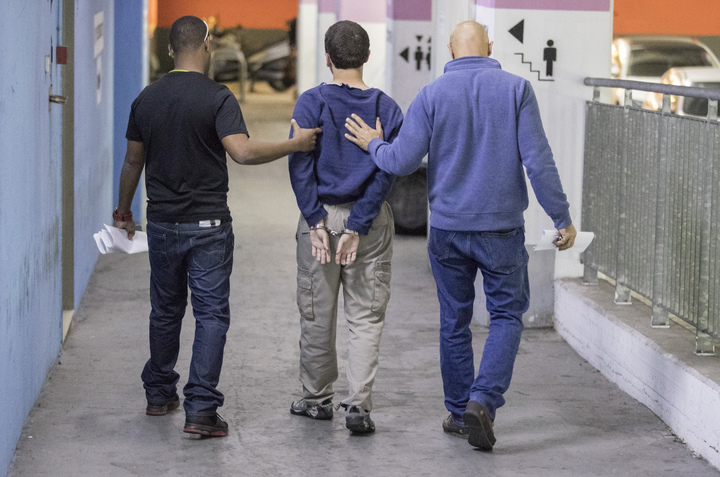 The unnamed American-Israeli Jewish teenager, accused of making dozens of anti-Semitic bomb threats in the US and elsewhere, is escorted by guards as he leaves the Israeli Justice court in Rishon Lezion. Photo: AFP

The young man holds dual US-Israeli citizenship and was arrested in Israel on Thursday local time on suspicion of making the threats.

US federal police had been investigating the threats, which included more than 100 bomb threats, in separate waves, over the past three months against Jewish community centres (JCCs) in dozens of states.

The incidents have stoked fears in the US of a resurgence in anti-Semitism and forced the evacuation of many centres, including some with day care for young children.

The arrest also comes less than a month after the arrest of former journalist Juan Thompson, 31, over eight similar threats in the US this year apparently linked to a plot against an ex-girlfriend.

Israel police said the suspect, whose home was searched on Thursday, was alleged to have also targeted centres in Australia and New Zealand, and began making the calls three months ago using advanced masking technologies, Israeli police said.

Israeli newspaper Haaretz reported the first incident was a 2016 bomb threat against a Jewish institution in New Zealand.

It said New Zealand police identified the online threat as originating from Israel.

An Israeli police spokesman said the suspect, whose identity could not be reported under a court order, is 18, and Jewish. Police initially gave his age as 19.

Israeli police said FBI agents participated in the probe in Israel that led to the arrest on Thursday.

"We believe he is responsible for the wave of calls, bomb threats, made to Jewish community centres in the United States," a spokesperson said.

The suspect covered his face with his sweatshirt as he entered the court. The court extended his police detention for eight days.

Galit Bash, the suspect's defence attorney, said a medical condition was the root of problem.

"My client ... suffers from a very serious medical problem, a problem that may affect his behaviour, his ability to understand right and wrong," his defence attorney told Reuters.

Israel's Channel 10 news quoted her as telling the court he had a benign growth in his head.

She said her client was home-schooled and incapable of holding down a job. She added he had been found medically unfit for Israel's compulsory military service.

Police said the suspect was responsible for a bomb threat against Delta Airlines flight 468 in January 2015 at New York's John F Kennedy airport.

The head of the New Zealand Jewish Council is not aware of any threats having been made to Jewish institutions in New Zealand within the past six months.

Council president Stephen Goodman said he could not confirm any such threat had been made, but the council's sympathies were with anyone who may have been affected.