Protests and boycotts are set to make today's Oscars ceremony the most politically-charged in recent history. 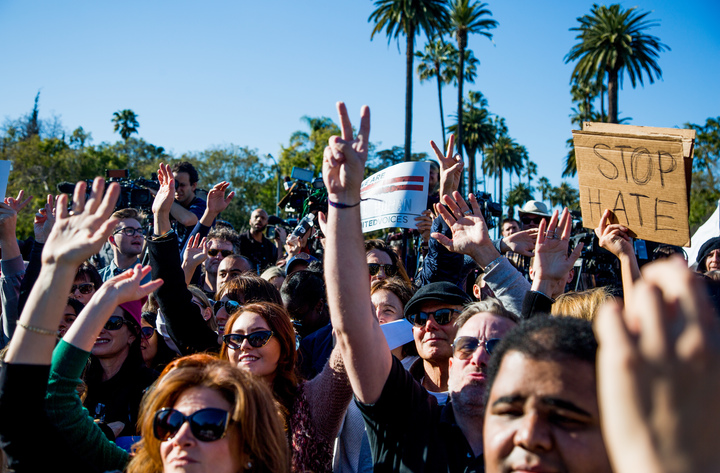 Members of the United Talent Agency rally against Donald Trump's policies ahead of the 2017 Academy Awards. Photo: AFP

The movie industry's premier celebration gets underway at about 1pm NZT, torn between escapism and reality.

The conflict is reflected in the wide range of best picture Oscar hopefuls and an awards season marked by fiery outbursts from Hollywood A-listers on immigration, civil rights and the rhetoric of US President Donald Trump.

Hundreds of police and private security personnel braved the rain early on Sunday local time, to seal the security zone around the Dolby Theatre in Hollywood where the Academy Awards will take place. Two protests are scheduled to take place outside the security perimeter.

After strongly opposing the election of Donald Trump as president, celebrities have used the spotlight at earlier award shows to denounce the Republican's hardline stances on immigration, transgender rights and the media.

On Saturday, hundreds of people attended a rally organised by the United Talent Agency, in place of its traditional pre-Oscar party. Actors Jodie Foster and Michael J. Fox were among those who addressed the crowd.

The directors of all five Oscar-nominated foreign language films on Friday denounced what they called a "climate of fanaticism and nationalism" in the United States and elsewhere.

Late night talk show host Jimmy Kimmel, who is hosting the Academy Awards ceremony, is not expected to go down that road.

"I don't think it will be very political," he told trade publication Variety last week of his opening monologue. But "there will be some element of that to the show".

Yet in a live show, with a worldwide audience of hundreds of millions, there is no telling what dozens of stars may say and do on the red carpet or when collecting their Oscar statuettes.

"A lot of people are very nervous about what's going on the the world - not just Donald Trump but in terms of war, in terms of homeless people, veterans rights," Variety magazine's awards editor Tim Gray told Morning Report.

"On one hand this is a chance to say something to 800 million viewers around the world.

"On the other hand, they only get 45 seconds. It's hard to come up with a solution to world problems in 45 seconds."

With a leading 14 nominations, romantic musical La La Land looks set to dance away with an armful of Academy Awards, including best picture, for its love letter to artistic ambition and Los Angeles itself.

"It's a movie that has a powerful emotional pull and the most emotional movies tend to do best at the Oscars. This one has an infectious enthusiasm and spirit that is irresistible," founder of awards website Goldderby.com Tom O'Neil said.

If fantasy prevails, La La Land, starring Emma Stone and Ryan Gosling as a struggling actress and jazz pianist, would be the first musical to win best picture at the Academy Awards since Chicago in 2003.

Black coming-of-age tale Moonlight is also expected to do well in a year that produced a record seven nominations for actors of colour and film stories that ranged from overlooked African-American female math geniuses (Hidden Figures) to interracial marriage (Loving), Indian street children (Lion) and black incarceration rates in modern US society (13th).

Tim Gray told Morning Report it would be La La Land's night. He picked it to take out best picture and director among at least half a dozen Academy Awards.

"If anything is a dark horse winner on Sunday, it would be Hidden Figures," Mr Gray earlier told Reuters.

"It's a good thing for diversity and it's doing well at the box office, and that is the really important thing," he said.