The chief strategist to US President Donald Trump has said that his election victory has ushered in a "new political order", calling the media the "opposition party". 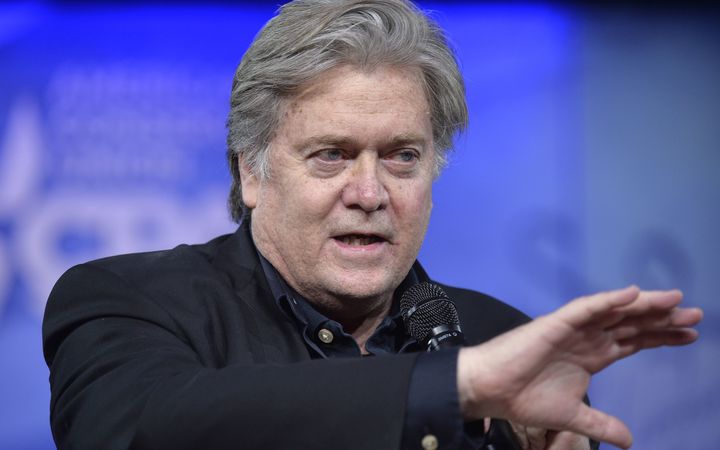 Steve Bannon vowed at a conservative conference to bring together those of "wide and sometimes divergent opinions" in support of "economic nationalism".

"We are a nation with a culture and a reason for being," the normally behind-the-scenes adviser told the audience.

He said the president was "maniacally focused" on pursuing his agenda.

"I've said that there's a new political order that's being formed out of this. And it's still being formed," he said.

Vice-President Mike Pence will address the conference later on Thursday, and President Trump will speak on Friday.

The joint appearance comes amid speculation that the two men are competing for power and influence within the Trump White House.

But the two men, who come from very different political backgrounds, attempted to dispel any rumours of their reported division and insisted they work closely in a partnership.

Mr Priebus, the former chairman of the Republican National Committee, was viewed as a liaison between the party establishment and Mr Trump's populist campaign.

Mr Bannon, formerly the driving force behind the anti-establishment Breitbart News, is considered one of Mr Trump's key advisers.

The president named Mr Bannon on the crucial National Security Committee at the expense of the joint chiefs of staff, an unprecedented move that signalled his influence on the administration.

During his appearance on Thursday, Mr Bannon repeated his attack on the media, describing members of the press as the "opposition party" who are "always wrong" about Mr Trump.

"I think if you look at, you know, the opposition party," Mr Bannon said, referring to the media.

Referring to the "corporatist, globalist media", he said: "If you [the audience] think they're going to give you your country back without a fight you are sadly mistaken."

Ms Conway said it was difficult for her to call herself feminist because she is not "anti-male" and "pro-abortion".

She added she was a "product of my choices, not a victim of my circumstances", which she described as "conservative feminism".

Ms Conway also criticised the Women's March, saying: "It turns out a lot of women don't like women in power".

Merriam-Webster responded on Twitter, sharing the definition of feminism as "the belief that men and women should have equal rights and opportunities".