The US under Donald Trump remains committed to co-operation and partnership with the European Union, Vice-President Mike Pence has told a meeting in Brussels. 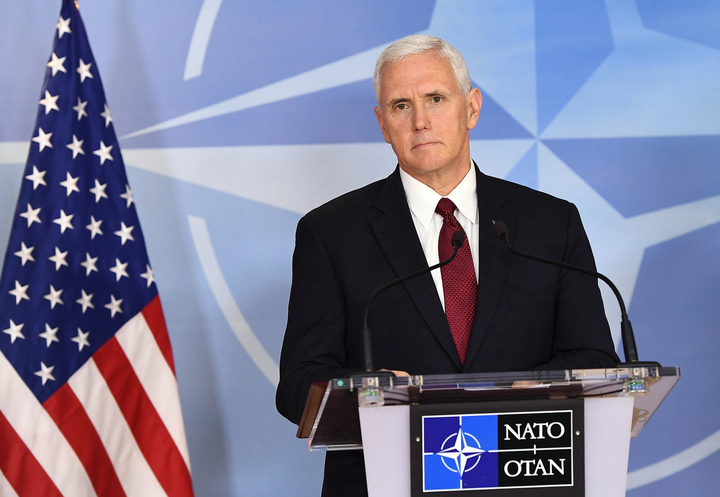 Donald Tusk, president of the European Council, said the EU was counting on unequivocal US support for a united Europe.

President Trump's comments on Brexit and the role of Nato have unsettled allies.

He has been vocal in his criticism of international organisations, including the North Atlantic Treaty Organisation (NATO), a defence alliance initially formed to meet the military threat to Europe from the Soviet Union.

Mr Trump has described NATO as "obsolete", and criticised members for not meeting the target of spending 2 percent of their GDP on defence.

He is seen as friendlier to Russia than his predecessors, and some of his former aides have come under scrutiny for their alleged links with Russia.

And he has spoken out in favour of Brexit, telling the Times newspaper last month that he thought the UK was "so smart in getting out", and predicting that "others will leave" the EU.

"This is not the moment for Europe to divide itself into former national, provincial categories," he said.

The vice-president said it was Mr Trump who asked him to travel to Brussels for talks with Mr Tusk and Mr Juncker.

Mr Pence told leaders gathered at the Munich Security Conference at the weekend that the US would be "unwavering" in its support for Nato.

He also said the US would continue to hold Russia accountable over the Ukraine conflict, though he said that President Trump believed that new common ground could be found with Russia.

He said the US was committed to "partnership with the European Union", stressed that they "shared the same heritage [and] the same values".

Mr Tusk said the meeting with Mr Pence was "truly needed", after what he described as "too many new and sometimes surprising opinions" that had been voiced in past months "for us to pretend that everything is as it used to be".

Mr Tusk said Mr Pence confirmed the US supported "the idea of a united Europe".

EU officials told reporters they were encouraged by the meeting, with one saying "we got everything we were looking for".

However, correspondents say EU leaders will be watching Mr Trump's words, and actions, to see if they match what his vice-president has pledged.