A judge has issued a stay stopping the deportation of people from seven Muslim countries, who are barred from entry under President Donald Trump's immigration order. 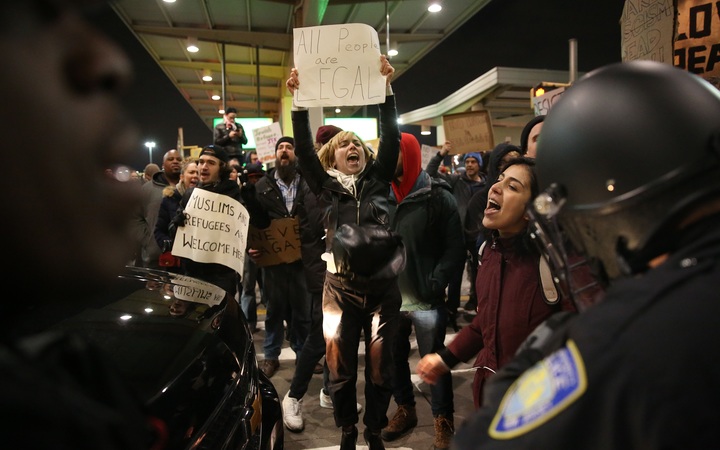 Police members intervene and arrest some of activists during the protest against President Donald Trump's 90-days ban of entry on 7 Muslim-majority countries in the Fourth terminal of JFK airport. Photo: AFP

A judge has issued a stay stopping the deportation of people from seven Muslim countries, who are barred from entry under President Donald Trump's immigration order.

The American Civil Liberties Union (ACLU) filed a lawsuit early on Saturday in response to the order, which barred migrants and refugees from the Muslim countries from entering the United States.

Judge Ann Donnelly said refugees and others trapped at airports could not be sent back to their home countries, but her ruling stopped short of allowing them into the US.

Nor did she address the constitutionality of the controversial executive order. 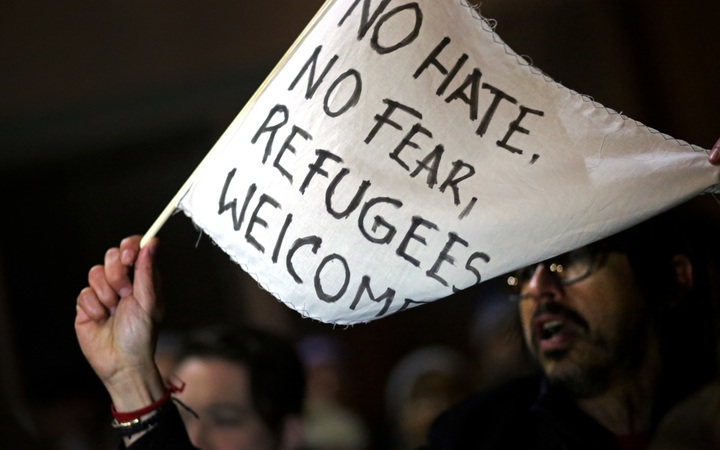 Protesters gathered outside of the Brooklyn Federal Courthouse as a judge heard a challenge against President Donald Trump's executive ban on immigration from several Muslim countries. Photo: AFP

Those held at airports might now be kept in detention while the case is resolved. A hearing is scheduled for the end of next month.

The court decision came as hundreds protested at airports in several US states over Mr Trump's immigration clampdown.

The union estimated between 100 and 200 people from the barred countries, including refugees, were being detained at airports or in transit.

At New York's John F Kennedy airport, protesters demanded the release of 11 refugees who were detained there. 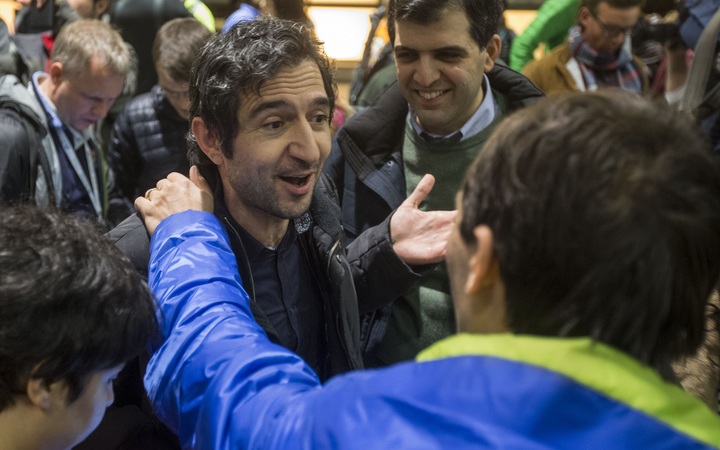 Mazdak Tootkaboni is a US green card holder from Iran and a professor at the University of Massachusetts at Dartmouth, but he was still separated from other passengers at Logan International Airport, Boston, and questioned because of Donald Trump's new immigration ban. Photo: AFP

Lee Gelernt, deputy legal director of the Immigrants Rights Project, argued the case in court and was greeted by a cheering crowd outside.

"The judge, in a nutshell, saw through what the government was doing and gave us what we wanted, which was to block the Trump order and not allow the government to remove anybody who has come and is caught up in the order, nationwide," he told the crowd.

He said the judge had ordered the government to provide a list of names of those detained under the order.

"We are going to see each of the people, provide counsel, try and get them out of detention right now - but at minimum, they will not be returned back to danger," Mr Gelernt said. 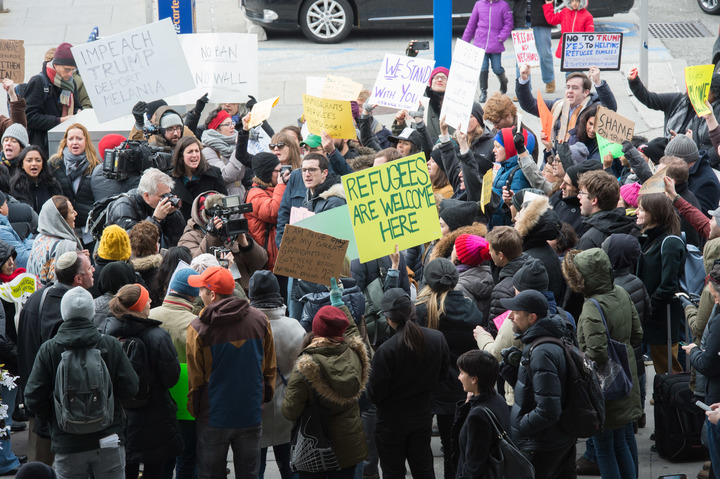 'This is a discriminatory order from President Trump'

Under Mr Trump's order, people fleeing Syria were banned from entering the US until further notice.

The other countries affected were Iran, Iraq, Libya, Somalia, Sudan and Yemen.

Mr Trump earlier told reporters at the White House the new rules were working out nicely. He denied they amounted to a ban on Muslims.

Confusion reigned at airports as immigration and customs officials struggled to interpret the new rules.

While those who were already in transit to the US at the time the order was issued on Friday are apparently being detained by border officials, other people affected by the ban are being prevented from boarding planes, despite having valid visas.

Human rights groups, including the National Immigration Law Centre (NILC) and the American Civil Liberties Union (ACLU), filed a lawsuit in New York to demand the release of two Iraqi men who were in the air bound for the US when the executive order was signed.

One of them, Haneed Khalid Darweesh, who had worked as a US Army interpreter, was released on Saturday afternoon. 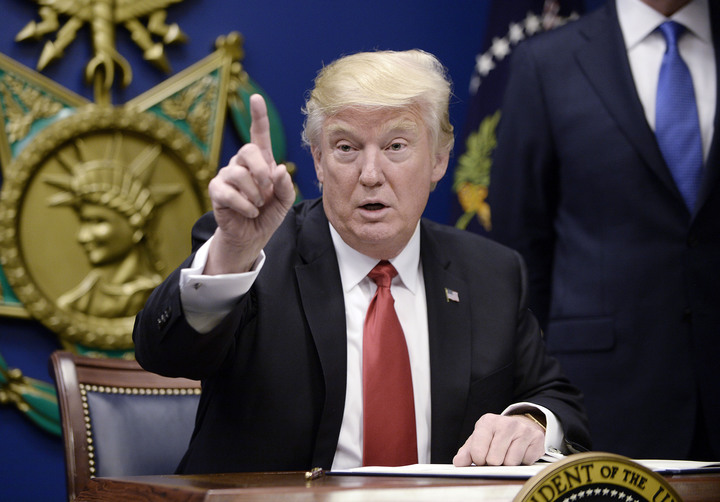 The other man, Haider Sameer Abdulkhaleq Alshawi, remains in detention.

Mark Doss, a lawyer for the two Iraqis, said he was delighted that Mr Darweesh had been released by border officials:

"This obviously was an illegal detention. This is a discriminatory order from President Trump and we will continue to fight for all of the refugees, immigrants and non-immigrants that are coming to the United States [and] are being illegally detained."

On Saturday several Iraqi passengers and a Yemeni national were prevented from boarding a flight at Cairo airport bound for New York, despite holding valid visas for the US.

Google has urged travelling staff members who are nationals of the seven countries affected to return to the US as quickly as possible.

United States officials said legal permanent residents who had passports from the Muslim-majority countries would be cleared back into the US on a case-by-case basis.

Mr Trump signed the order on Friday, which was International Holocaust Remembrance Day.

The president's statement to mark that occasion, on the 72nd anniversary of the liberation of Auschwitz, made no mention of Jews or anti-Semitism.

In response to Mr Trump's order, the United Nations refugee agency said the needs of those fleeing conflict had never been greater.

The Council on American Islamic Relations (CAIR) also said it would file a lawsuit.

There have been reports of "green card" holders, who are legal permanent residents of the US, being prevented from getting on flights.

However, green cards are not specifically mentioned in the executive order, and so the status of green card holders remains unclear.

CAIR advised non-US citizens, including permanent residents, from the seven countries to plan to delay all international travel for at least 90 days.

For Iran, the ban would make it almost impossible for relatives and friends of an estimated 1 million Iranian-Americans to visit the US.

Mr Trump said the measures detailed in his executive order would "keep radical Islamic terrorists out of the US".

Human rights groups say there is no link between Syrian refugees in the US and terrorism.

The President of the International Rescue Committee, David Miliband, said Mr Trump was playing into the hands of the Islamic State group.

"The propaganda gift of this is to people who would do damage to the United States. There is nothing that ISIS want more, than to be able to say to Muslims around the world, look, we're the people who will protect you, America will never give you haven," Mr Miliband said.

During the election campaign, Mr Trump suggested a "total and complete shutdown of Muslims entering the United States until our country's representatives can figure out what is going on".

"@POTUS is a man of action and impact. Promises made, promises kept. Shock to the system. And he's just getting started," she tweeted.

Get used to it. @POTUS is a man of action and impact.
Promises made, promises kept.
Shock to the system.
And he's just getting started https://t.co/AoUsZWClXt

This call was widely rejected by both Democrats and Republicans while Mr Trump remained just a candidate.

Speaker of the House of Representatives, Paul Ryan tweeted his opposition to "a religious test for entering our country" in July 2016.

On Friday, Mr Ryan, issued a statement responding to the executive order saying it was "time to re-evaluate and strengthen the visa vetting process".

Mr Trump's Vice-President Mike Pence called the proposed ban on Muslims "offensive and unconstitutional" in a tweet in December 2015.