Embryos that are less than 0.001 percent human - and the rest pig - have been made and analysed by scientists.

It is the first proof chimeras - named after the mythical lion-goat-serpent monster - can be made by combining material from humans and animals. 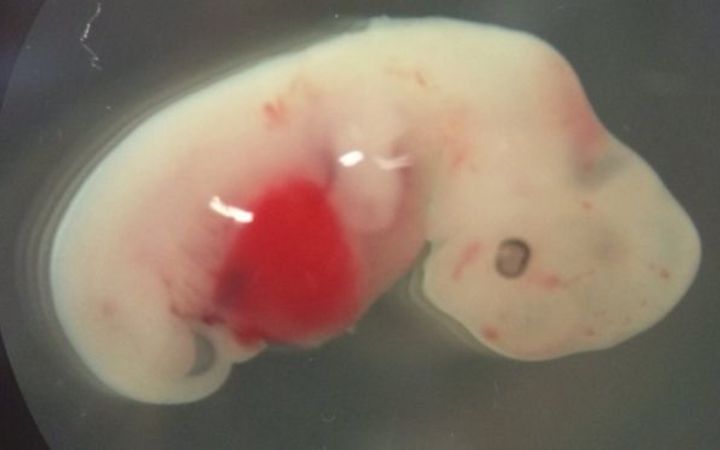 However, the scientific report in the journal Cell shows the process is challenging and the aim of growing human organs in animals is distant.

It was described as an "exciting publication" by other researchers.

To create a chimera, human stem cells - the type that can develop into any tissue - are injected into a pig embryo.

The embryo - now a mix of human and pig - is then implanted into a sow for up to one month.

The process appears very inefficient - of the 2075 embryos implanted only 186 continued to develop up to the 28-day stage.

But there were signs that human cells were functioning - albeit as a tiny fraction of the total tissue - as part of a human-pig chimera.

"This is the first time that human cells are seen growing inside a large animal," Prof Juan Carlos Izpisua Belmonte, from the Salk Institute, told the BBC.

Commenting on the inefficiency, Prof Belmonte said: "Humans and pigs are separated by a long time in evolution."

Development in the womb is also much faster in pigs - pregnancy lasts less than four months compared with about nine in people.

"It is like a freeway with one car going much faster than another - you're more likely to have an accident," Prof Belmonte said.

He added there was a "long distance" between now and growing animals with human organs - such as a heart, pancreas or liver, that can be transplanted.

However, in the meantime, the Salk researchers argue that making chimeras with more human tissue could be useful for screening drugs before human trials, studying the onset of human diseases, understanding the earliest stages of human embryo development and explaining differences between organs in different species.

Dr Jun Wu, part of the research team, told the BBC: "[Getting the efficiency] in the range of 0.1 percent to 1 percent human cells should be enough.

"Even at this early stage [28-days], billions of cells in the embryo would have millions of human cells, then testing would be meaningful and practical."

There was no evidence that human cells were integrating into the early form of brain tissue.