Scientists have moved the minute hand of the symbolic Doomsday Clock 30 seconds closer to midnight for the first time.

Leading scientists, who are the clock's keepers, say the world has edged closer to apocalypse in the past year amid a darkening security landscape and comments by US President Donald Trump. 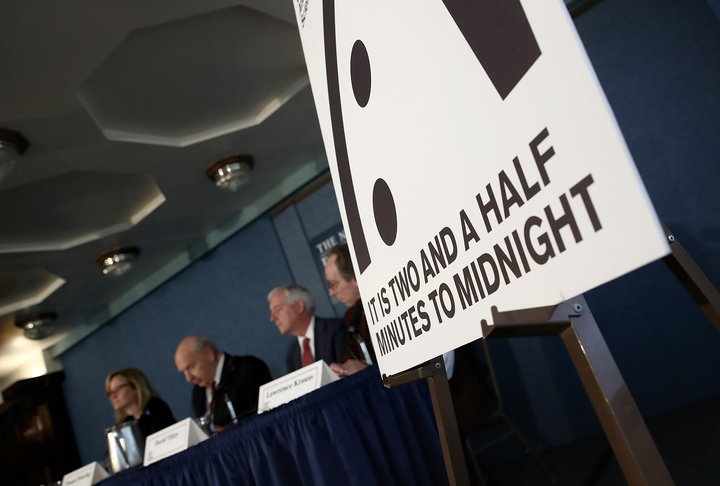 Members of the Bulletin of Atomic Scientists unveil the 2017 time for the "Doomsday Clock" Photo: AFP

The clock now says the world is 2.5 minutes from apocalypse.

Bulletin of the Atomic Scientists (BPA) chief Rachel Bronson urged world leaders to "calm rather than stoke tensions that could lead to war".

In a report, the BPA said Mr Trump's statements on climate change, expanding the US nuclear arsenal and the questioning of intelligence agencies had contributed to the heightened global risk.

It is the closest the clock has come to midnight since 1953, when the minute hand was moved to two minutes away following hydrogen bomb tests by the US and Russia.

The minute hand on the Doomsday Clock is a metaphor for how vulnerable the world is to catastrophe.

The symbolic device was created by the Bulletin of the Atomic Scientists in 1947. The BPA was founded at the University of Chicago in 1945 by a group of scientists who helped develop the first atomic weapons.

Today, the group includes physicists and environmental scientists from around the world, who decide whether to adjust the clock in consultation with the group's Board of Sponsors - which includes 15 Nobel laureates.

For the last two years, the minute hand of the Doomsday Clock has stayed set at three minutes before the hour. But the BPA says the danger of global disaster is even greater in 2017.

It said: "Disturbing comments about the use and proliferation of nuclear weapons made by Donald Trump, as well as the expressed disbelief in the overwhelming scientific consensus on climate change by both Trump and several of his cabinet appointees, affected the Board's decision, as did the emergence of strident nationalism worldwide."

Other influencing factors listed in the BPA report include doubts over the future of the Iran nuclear deal, threats to cyber security and the rise of fake news.

The board's decision to move the clock less than a full minute - something it has never before done - is because Mr Trump has only recently taken office and many of his cabinet nominations are not installed in government.

The clock was last adjusted in 2015 when it was moved from five minutes to three minutes to midnight amid global perils such as climate change and nuclear proliferation.

That was the closest it had been more than 20 years.

It was last at three minutes to in 1984 when US-Soviet relations reached their lowest point.