A magnitude 7.9 earthquake has struck Papua New Guinea, but has not caused any tsunami threat for New Zealand. 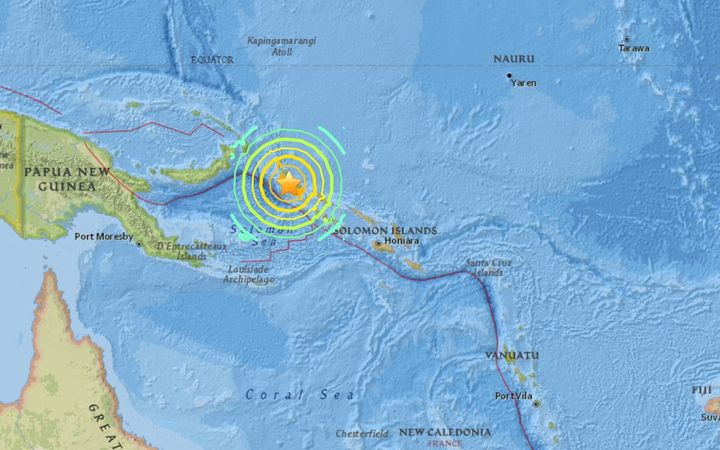 The earthquake triggered a tsunami alert for several Pacific islands, but was subsequently wound back to cover just PNG and the neighbouring Solomon Islands.

Austhorities in Australia and New Zealand both said they had assessed the threat and there was no danger to their coastlines.

The United States Geological Survey (USGS) downgraded the quake from an initial measurement of magnitude 8.0. It struck some 47kms west of Arawa on the north coast of Bougainville Island at a depth of 154km, USGS reported.

The Pacific Tsunami Warning Center said in an updated advisory that waves of 0.3m to 1m above tidal level were possible along the coasts of PNG and the Solomon Islands. It wound back an earlier alert that encompassed Nauru, Pohnpei, Kosrae, Vanuatu, Chuuk and Indonesia.

Quakes are common in Papua New Guinea, which sits on the Pacific's "Ring of Fire", a hotspot for seismic activity due to friction between tectonic plates.

Loti Yates, the director of the Solomon Islands National Disaster Management Office, said people had been told to move to higher ground in Choiseul and Western Province.

"That isn't the only fear we have," Mr Yates told Reuters by phone from the capital of Honiara, adding that his office was trying to contact communities closest to the quake's epicentre.

"We are also worried about damage from the earthquake."

Chris McKee, assistant director at PNG's Geophysical Observatory Office in Port Moresby, said there were no initial reports of damage from near the epicentre of the quake, which is sparsely populated.

"Because of the great depth of the earthquake it is unlikely that there will be any significant tsunami activity," Mr McKee said.

Bougainville Island is one of the islands that make up the Autonomous Region of Bougainville within Papua New Guinea which is home to around 300,000 people.