West African leaders have given Yahya Jammeh a final opportunity to relinquish power after Senegalese troops entered The Gambia. 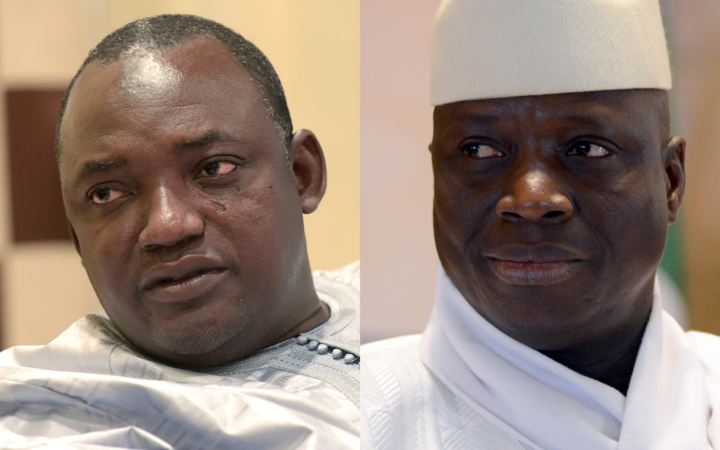 Gambian president Adama Barrow, left, has been sworn in, but Yahya Jammeh is refusing to cede power. Photo: AFP

Mr Jammeh has been given until noon on Friday (1am Saturday NZT) to leave office or be forced out by UN-backed regional forces.

Troops have been told to halt their advance until the deadline passes.

The Economic Community of West African States (Ecowas) is acting in support of Adama Barrow, who was sworn in as the new Gambian president on Thursday.

His legitimacy as president, after winning last month's election, has been recognised internationally.

Chairman of the Ecowas commission, Marcel Alain de Souza, said that if the meeting with Mr Conde proved unsuccessful, militarily action would follow.

"If by midday, he [Mr Jammeh] doesn't agree to leave The Gambia under the banner of President Conde, we really will intervene militarily," he said.

Ecowas said that its forces had encountered no resistance after entering The Gambia on Thursday.

Troops from Senegal and other West African countries crossed into The Gambia after an initial deadline for Mr Jammeh to stand down passed with his resignation.

Mr Barrow, who remains in Senegal, has said that he will not return to Gambia's capital, Banjul, until the military operation had ended.

The threat by the West African regional bloc Ecowas to remove Mr Jammeh by force is supported by the 15-member UN Security Council, although the council has stressed that a political solution should be the priority.

A Senegalese army spokesman, Col Abdou Ndiaye, told the BBC that troops who were now in The Gambia were prepared to fight if necessary.

"It is already war, if we find any resistance, we will fight it," he said, adding: "If there are people who are fighting for the former president, we will fight them."

But Col Ndiaye said the main goal of Ecowas was to restore democracy and to allow the newly-elected president to take power.

In his inaugural speech at the Gambian embassy in Senegal's capital, Dakar, President Barrow ordered all members of The Gambia's armed forces to remain in their barracks.

Any found illegally bearing arms would be considered "rebels", he said.

Why is Yahya Jammeh refusing to go?

After first accepting defeat Mr Jammeh reversed his position and said he would not step down. He declared a 90-day state of emergency, blaming irregularities in the electoral process.

The electoral commission accepted that some of its early results had contained errors but said they would not have affected Mr Barrow's win.

Mr Jammeh has said he will stay in office until new elections are held.

Remaining in power would also give him protection against prosecution for alleged abuses committed during his rule.