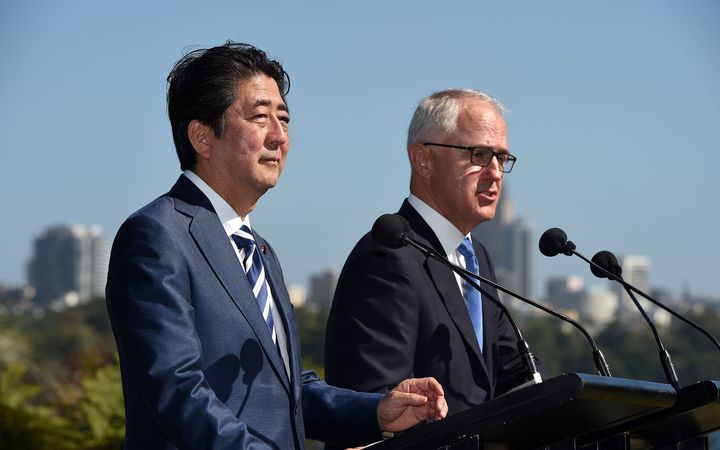 Japanese Prime Minister Shinzo Abe and Australian Prime Minister Malcolm Turnbull made the announcement after their official meeting as part of Mr Abe's four-country trip to boost Japan's trade and security in the Asia-Pacific region.

Mr Abe was due to visit Indonesia and Vietnam before returning to Japan.

In his first visit to Australia since Mr Turnbull became Prime Minister, he said both leaders were committed to ensuring the 12-country TPP trade deal would come into effect.

"On the economic front we agreed that we should demonstrate anew the importance of free trade," he said.

"We confirmed that we would coordinate toward the early entry into force of the TPP and the prompt conclusion of the RCEP [Regional Comprehensive Economic Partnership]."

The commitment came despite United States President-elect Donald Trump criticising the TPP as a "potential disaster" for the US and vowing to prioritise withdrawing from the pact.

Mr Abe, who had previously said the TPP would be meaningless without the US, said the countries also agreed to maintain "solid cooperation" with the Trump administration.

He was also the first foreign leader to meet with the President-elect following the US election.

Mr Turnbull described the Australia-Japan relationship as "closer and stronger than ever" and announced the Japanese government had agreed to step up military cooperation with Australia.

Mr Abe said the "extremely meaningful" talks at Kirribilli House would advance the countries' security interests in the region.

"It is our earnest hope that we'll continue to see the ratification of the TPP by all 12 countries," he said.

"In the interim, we'll work towards being strong advocates of the myriad of advantages that flow and will understand that through the TPP we can overcome the mutual challenges we face."