Asylum seekers on Manus Island say two Iranian men are being treated for injuries they received when they were beaten by police officers on New Year's Eve. 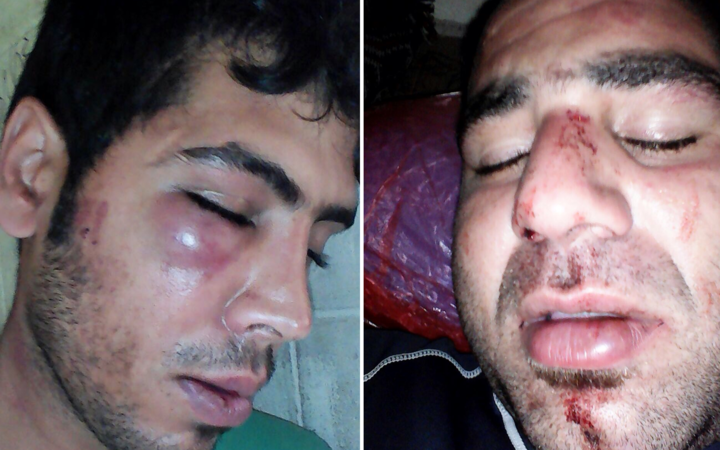 The men were released after two days in the cells at the Lorengau Police Station on the island, where they said they did not receive food, water or medical treatment.

They were eventually taken to the medical clinic inside the Australian detention centre on the island.

Photos supplied by the Refugee Action Coalition show injuries to the men's faces, bodies and hands.

They told other asylum seekers up to 10 police officers beat them after they were stopped by Papua New Guinea (PNG) immigration officials on their way into town.

Iranian asylum seeker Benham Satah, who met the men on their release, said both were seriously injured.

"They are very injured," he said.

"One of them, his nose is probably broken ... He says when he is urinating there is blood in his urination. The other one says his jaw is broken."

Mr Satah said the men were released on 400 Kina ($NZ180) bail after being charged with being drunk and disorderly and resisting arrest.

He said both men denied the charges and said they had not been drinking on New Year's Eve.

Police and PNG immigration authorities are yet to respond to the allegations.

The government said it was not yet clear what had triggered it.

But Immigration Minister Peter Dutton said the advocates might be using the incident to attack the government's immigration policies.

Mr Dutton told Sydney radio station 2GB that he wanted to hear from the PNG police before commenting further.

"If people have had an interaction with the PNG police on a New Year's Eve night, I would wait to see the full facts of that case before I'd make any comment to say that they were targeted because they were refugees or because they were part of the Manus Island population," he said.

"I think we're better off to wait for the full facts instead of letting the refugee advocates try to use this to again attack the government's successful border protection policy."

A spokesperson for the Department of Immigration said the department was aware of an incident involving two asylum seekers, but that it was a matter for the PNG police force.

The incident follows the death of a Sudanese asylum seeker who collapsed at the Manus Island detention centre just before Christmas.

The ABC has sought responses from police on Manus Island and from PNG's immigration service.