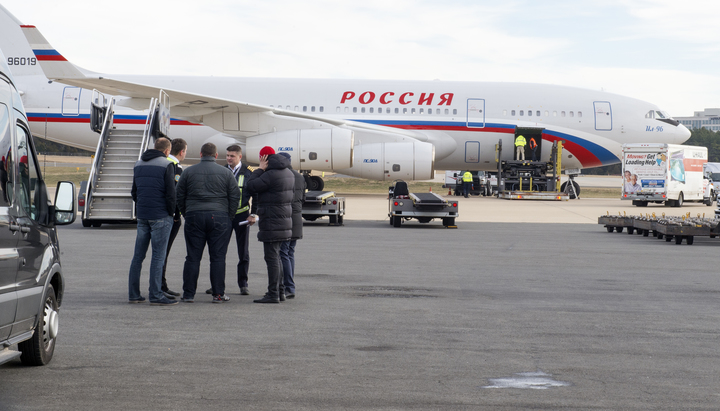 The diplomats left on a Russian aircraft on New Year's Day. Photo: AFP

An embassy official said the plane had taken off with all the affected personnel and their families aboard.

Mr Obama ordered the expulsion in response to alleged hacking of the US Democratic Party and Hillary Clinton campaign during the 2016 presidential election.

President-elect Donald Trump has promised a revelation later this week about the allegations.

A spokesperson for the Russian embassy in the US, quoted by the TASS news agency, confirmed the departure of the plane from Washington on New Year's Day.

The aircraft was part of the Rossiya airline's special flight detachment group - the carrier for the president of Russia and other government officials.

Mr Obama's order had given the affected diplomats just 72 hours to leave the country.

Russian president Vladimir Putin had been expected to respond in kind, with the expulsion of US diplomats from its territory.

However, he later said he would not "stoop" to "irresponsible diplomacy", but rather attempt to repair relations once Mr Trump took office.

Mr Trump praised the decision as "very smart". He has also said Americans "ought to get on with our lives" rather than sanction Russia.

On New Year's Eve, Mr Trump said he would reveal details "people don't know" about the incident in the coming days.

"I know a lot about hacking,'' he told reporters, "and hacking is a very hard thing to prove, so it could be somebody else."

He said he knew "things that other people don't know, and so they cannot be sure of the situation".

He refused to provide details, saying he would make an announcement on "Tuesday or Wednesday".

The president-elect also suggested that computers could not be trusted with sensitive information, and recommended using pen and paper.

"You know, if you have something really important, write it out and have it delivered by courier, the old-fashioned way," he said.

"Because I'll tell you what - no computer is safe."

'What Donald Trump may know ... is open to speculation'

Mr Trump has continued to express scepticism over whether Russia was the culprit.

Washington correspondent Simon Marks told Summer Report this morning it was difficult to know what was behind Mr Trump's scepticism, other than his continued public support of Mr Putin.

"What Donald Trump may know about the hacking of the Democratic Party's computer servers is open to speculation," Mr Marks said.

"And how he may have any information is also open to speculation given that he has consistently raised questions about whether Russia was behind the hacking attacks.

"He has argued that it could have been another foreign government. He also likes to say that it could be someone weighing 400 pounds sitting in a New Jersey bedroom."

Mr Trump's information would have to be fairly definitive, given 17 branches of the government involved in intelligence gathering had told Mr Obama they believed Russia was behind it, Mr Marks said.

"Donald Trump's response to that is: 'Well, these are the same intelligence organisations that claimed that Saddam Hussein had weapons of mass destruction in Iraq. They were wrong about that, how do they know that they're right about this?'"