Up to 80 people were injured, about 20 seriously, in a crowd stampede at the Falls Festival on Victoria's south-west coast overnight. 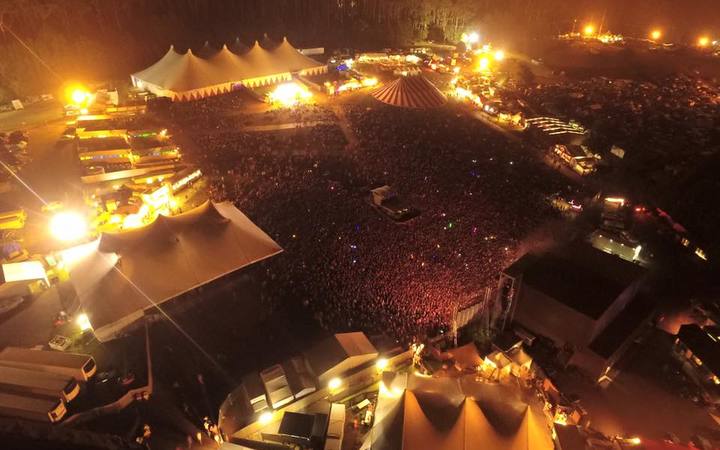 Paramedics assessed dozens of people following the crowd crush at the music festival in Lorne shortly before 11pm on Friday (1am Saturday NZT).

Police said music fans were injured when people at the front of the crowd lost their footing as they were trying to leave a performance by Australian rock band DMA's.

Thirteen women and six men aged from their late teens to late 20s were taken to hospital with injuries including leg, rib, hip and pelvic fractures, possible spinal injuries, head and facial injuries as well as cuts and abrasions.

Another person was also taken to hospital with a medical complaint.

Entertainment was suspended due to the emergency situation.

One of the victims, 19-year-old Olivia Jones, is being treated in Lorne Hospital for leg injuries.

She described being trapped at the bottom of the stampede and blamed narrow exits and too many people in the tent for the crowd crush.

"My legs were crushed, I thought they were broken. I couldn't feel my legs," she said.

"I was under there for about three minutes just gasping for air and I eventually passed out and was dragged out and slapped in the face a few times to be woken up."

Many criticised organisers for not providing enough exits for the size of the crowd.

"It was extremely serious ... so many of us thought we weren't going to make it out of that," Lucy Spry wrote on the festival's Facebook page. "Not enough exits for such a large crowd."

Lpu Jani wrote: "We have footage of the crowd crush tonight and my daughter was lucky to survive this horrific event due to small exits, late security intervention and the band set up of DMA.

"Shoes were torn off, phones crushed and bones broken let's be serious this is a traumatic event for the patrons."

In a statement, festival organisers said they were in the process of setting up phone lines for festival-goers to call home as reception at the site was limited.

"No-one is critically injured in the incident last night, for any cases which caused concern, the families have been contacted," they said.

"While quite a few people are rattled, everyone is safe onsite and medical [staff] are available to help anyone with worries."

Geelong Hospital said 15 people were transported there, 11 women and four men, but four had since been discharged.

The remaining patients were admitted for further treatment and observation with fractures, sprains and cuts but were in a stable condition.

Authorities said it was lucky no-one was killed in the crowd stampede.

State Health Commander Paul Holman said despite the number of injuries, it could have been far worse.

"We've seen these events overseas and they have had tragic outcomes and we're very fortunate we've had no deaths as a result of this," he said.

"Although we have had 20 serious injuries and a lot of people injured we've had no deaths and we're really grateful for that."

Mr Holman said Ambulance Victoria had paramedics and ambulances on site which were dedicated to the event.

"It was quite a chaotic scene and required a major response," he said.

"We had a good medical presence on site and worked closely with first aid providers and local hospitals to coordinate the treatment and transport of those injured.

"While the injuries are significant, this could have been quite a tragedy and we are grateful that the outcome was not worse."