Palestinian militant group Hamas is blaming Israel for the death of a Tunisian man it describes as one of its drone experts. 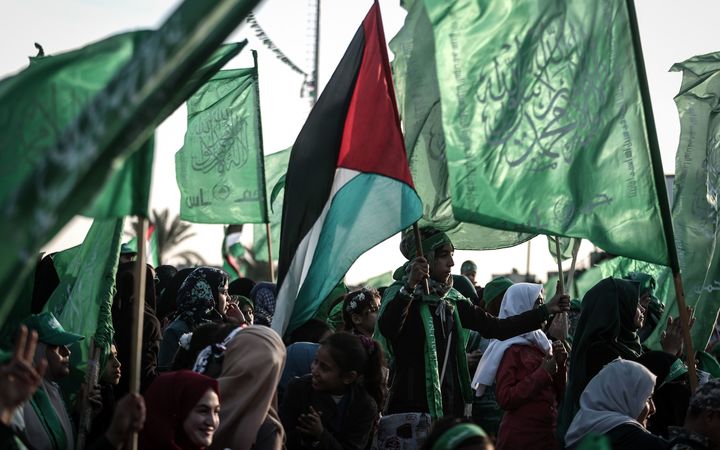 Thousands of people gathered to celebrate the 29th anniversary of the foundation of Hamas, in Rafah, Gaza, on Friday. Photo: AFP

Mohamed Zaouari, 49, was shot dead at the wheel of his car outside his home in Tunisia on Thursday.

Hamas's armed wing, the Qassam Brigades, said Mr Zaouari had been a member of the group for 10 years and had been supervising its drone programme.

Hamas, which rules the Gaza Strip, declared a day of mourning and vowed to avenge the death.

"The enemy must know the blood of the leader Zaouari will not go in vain," a statement posted on the group's website said.

The Tunisian interior ministry said Mr Zaouari was killed in his car by multiple gunshots in front of his house in El Ain, near Sfax, on Thursday. Four rental cars were used in the killing and two handguns and silencers were seized, the ministry said.

Television footage aired on local media showed a black Volkswagen with its windows apparently shot out.

One of the suspects was a Tunisian journalist based in Hungary, arrested along with a cameraman. Two other suspects, one of them a Belgian of Moroccan origin, are still at large, a judicial spokesman from Sfax, Mourad Tourki said.

A spokesman for Israeli Prime Minister Benjamin Netanyahu did not respond to a request for comment.

Israel has not responded to the claims, and authorities have not commented on suspects.

Israeli Minister Tzachi Hanegbi, a confidant of Mr Netanyahu, told Israeli Channel One on Friday: "I hope this issue will not be ascribed to us, that it is not connected to us and that none of those people arrested are our allies."

Tunisian media said Mohamed Zaouari had returned to Tunisia in 2011 after spending two decades abroad, including in Syria. They gave his age as 49 and said he was a technical director in a private engineering firm and a model aircraft expert.

Israel has in the past voiced concern that armed groups in Gaza and Lebanon would deploy drones carrying explosives inside its borders in a future war. Hamas and other Islamist militias have fired thousands of rockets at militarily superior Israel in previous conflicts, but have made scant use of drones.

In September, the Israeli army said it had intercepted a drone off the coast of Gaza.

It was the first such incident reported since the 2014 Gaza war, when a US-supplied Israeli Patriot missile destroyed an unmanned Hamas aircraft over the southern Israeli port city of Ashdod. Israel is itself a world leader in drone technologies and has used the vehicles extensively in combat.

Israel's Mossad spy agency is widely believed to have been behind the assassination of Hamas operative Mahmoud al-Mahbouh in Dubai in 2010. Israel has never confirmed or denied involvement in the killing.