A Chinese warship has seized an American underwater drone in the South China Sea, triggering a formal diplomatic protest, the Pentagon has confirmed. 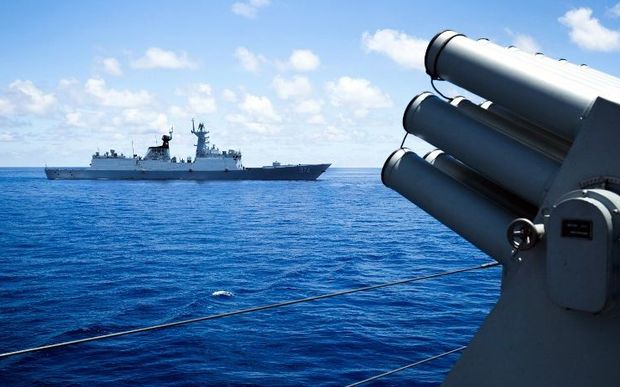 The drone, which had been deployed by an oceanographic survey vessel in the South China Sea, was seized by a warship from the Chinese Navy on Thursday northwest of Subic Bay on the Philippines' west.

The official, speaking on condition of anonymity, told Reuters the seizure had triggered a formal demarche from the US and a demand for its return.

He said the survey ship, USNS Bowditch, had been about to retrieve the unmanned underwater vehicle (UUV).

"The UUV was lawfully conducting a military survey in the waters of the South China Sea," the official said.

"It's a sovereign immune vessel, clearly marked in English not to be removed from the water - that it was US property."

The Pentagon confirmed the incident at a news briefing and said the drone used commercially available technology and sold for about $150,000.

A US think tank reported this week that new satellite imagery indicated China had installed weapons, including anti-aircraft and anti-missile systems, on all seven artificial islands it had built in the South China Sea.

The seized underwater drone was part of an unclassified program to collect oceanographic data, including salinity, temperature and clarity of the water, the official added.

Such data can help inform US military sonar data, since sound is affected by such factors.

The Chinese have acknowledged the demarche but not responded to it, the official added.

US, Australia urged to get tough on South China Sea

Meanwhile, a new Australian and US joint report study said China had gained "effective control" over the sea and was using "psychological warfare" in its quest for territorial expansion.

The report, titled Countering China's Adventurism in the South China Sea, concluded current policies had failed to strongly challenge Beijing's "adventurism" and suggested options for the US' new Trump administration to help free up the strategic waterways.

"They're conducting information operations and spreading disinformation, they're fostering pro-Beijing groups in allied countries, they are of course paying for Chinese media supplements from [China's largest newspaper] the People's Daily," Professor Babbage said.

He argued Australia should consider conducting "freedom of navigation" operations within 12 nautical miles of contested islands in the South China Sea.