A bombing near the Coptic cathedral in the Egyptian capital Cairo has killed at least 25 people, officials say. 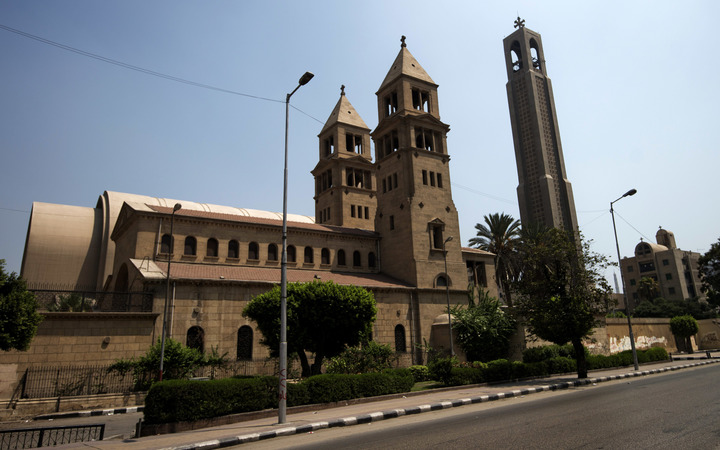 Dozens of others were reportedly injured in the blast at St Peter's church.

The church is adjacent to St Mark's cathedral, within the same complex. Photos and video footage showed damage to the church, with shattered windows and broken roofing.

The explosion happened at around 10:00 local time.

Video sourced by regional media appeared to show the interior of the church littered with broken and scattered furniture, along with blood and clothing on the floor.

Interior minister Magdi Abdel-Ghaffar and Cairo's security chief both inspected the scene, according to local media.

Egypt's Coptic Christians make up about 10 percent of the country's population.

St Mark's Cathedral is the headquarters of the country's Orthodox church, and the home of its leader, Pope Tawadros II.

On Saturday, six policemen were killed when a bomb exploded on a main road leading to the pyramids at Giza. The explosion, at a police checkpoint, was the deadliest attack on security forces in Cairo in over six months.

A recently formed militant group called Hasm said it carried out the attack.

Egypt's Coptic Christian minority have complained of discrimination in the mostly Muslim nation.

Two people were killed outside St Mark's cathedral in 2013, when people mourning the death of four Coptic Christians killed in religious violence clashed with local residents.

In February this year, a court sentenced three Christian teenagers to five years in prison for insulting Islam. The teenagers had appeared in a video, apparently mocking Muslim prayers, but claimed they had been mocking the Islamic State group following a number of beheadings.

Egypt has pursued a number of blasphemy cases since the country's 2011 uprising. Many of those cases have been against Copts.

The government of President Sissi came to power following the overthrow of Mohammed Morsi in 2013. It outlawed the Muslim Brotherhood, and has been battling insurgent Islamic groups ever since.

Most of the militant attacks have been focused in the Sinai province, where an IS-linked jihadist group is active, but Cairo has also suffered a string of attacks in the past two years.