A tsunami threat in the Pacific from a 7.8-magnitude earthquake has largely passed, the Pacific Tsunami Warning Centre says.

Look back at how the threat unfolded following the quake:

The #tsunami threat from the Solomon Islands #earthquake has now passed. #PTWC https://t.co/b6yWURQcxk

Our team in Honiara being accounted for at moment. Heeding #tsunami warning and moving to higher ground #SolomonIslands #earthquake https://t.co/pCNjBePoGt

The Pacific Tsunami Warning Centre says waves up to three metres above the high tide line are possible along some coasts of Solomon Islands, and up to one metre in Papua New Guinea.

Other Pacific nations at risk of waves include Vanuatu, Papua New Guinea, New Caledonia and Tuvalu.

The marine and beach threat has been cancelled but Civil Defence still has this advice:

There could be strong & unusual currents for the rest of the day, esp. on west coasts of NZ. MCDEM advise people to stay out of the water.

RNZ International's Solomon Islands correspondent Dorothy Wickham says people in Honiara are now starting to head home, and those with businesses are checking out their properties for damage.

She says there needs to be a better system for civil defence officials to communicate with residents - radio services were still playing automated music at that time of the morning and she only knew about the tsunami risk from the internet.

New Zealand Civil Defence says the potential threat for marine and beach areas has been cancelled.

Because it was still quiet dark, many people panicked he says.

People were remaining in the hills and were quite safe there, he says.

RNZ International's Solomon Islands correspondent Dorothy Wickham says there was huge panic at the National Referral Hospital in Honiara when the quake struck at about 4.30am local time.

Nurses at the hospital say the power went out and patients and their relatives were running around.

Many Honiara residents ran for the back hills when the earthquake struck, Dorothry Wickham says.

Police at Kirakira in the Makira province have reported that as of 6am local time (8am NZT) no major damage has been reported.

However, some leaf-thatched houses collapsed.

There are widespread tsunami warnings across the Pacific, including for Papua New Guinea, areas around the Solomon Islands and French Polynesia. A tsunami watch for American Samoa has just been lifted.

Currently no evacuation required for Auckland region after a 7.7 magnitude earthquake in south east of the Solomon Islands this morning.

GNS science duty seismologist Geoff Kilgour said the quake was about 40km below the surface.

It appeared to be a reverse fault, where the land was pushed up, which was why tsunami waves in the Pacific may be generated.

"Its very early at this stage to talk about the magnitude of the tsunami," he told Morning Report.

People in coastal areas should listen to the radio and/or TV for updates. Follow instructions of local civil defence authorities.

#SolomonIslandsEarthquake People in coastal areas should stay out of the water. Stay off beaches and shore areas. Do not go sightseeing.

The National Disaster Management Office in the Solomon Islands says it has been trying to contact the affected areas. Its Director, Loti Yates, says his office is unsure about the impact of the quake at this stage as it's still early in the morning, but they should have more information in the coming hours. The epicentre of the quake was off Kirakira, capital of the Makira and Ulawa province.

Civil Defence controller Sarah Stewart-Black told RNZ's Morning Report there was a "potential marine and beach threat" for New Zealand. It was not the same situation as after the 7.8 Kaikōura earthquake, she said.

There could be unusual currents coming into harbours, and people should stay off the beaches and away from coastal areas. The warning applied to all of New Zealand including the Chatham Islands. 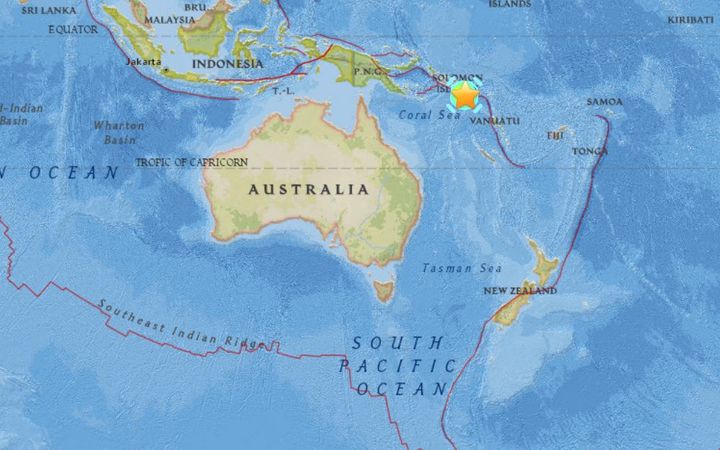 Welcome to live updates on the 7.8 earthquake that struck near Solomon Island this morning. The quake prompted a tsunami alert for Pacific countries and a potential marine and beach threat for New Zealand.