South Korea's President Park Geun-hye has asked the country's Parliament to help her find a way to stand down after widespread protests calling for her resignation. 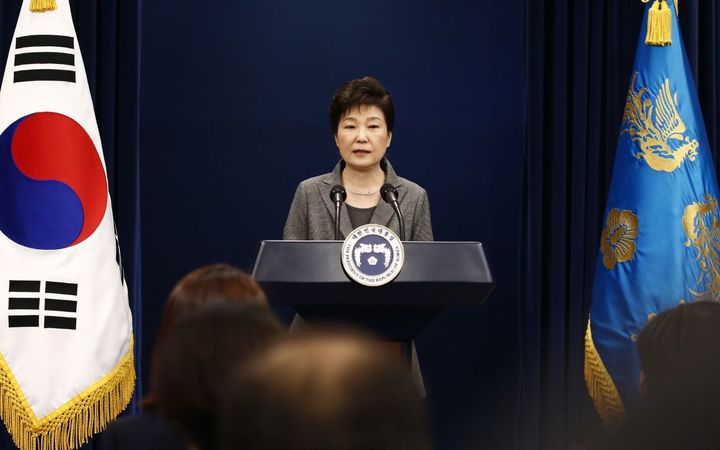 South Korea President Park Geun-hye makes an address to the nation at the presidential Blue House in Seoul. Photo: AFP

Ms Park faced growing calls to resign during an investigation into whether she allowed a long-time friend to influence political decisions for personal gain.

She said she would "leave to Parliament everything about my future including shortening of my term", but did not want to leave a power vacuum.

Parliament was due to discuss on Friday whether she should face impeachment.

Opposition parties have said the president should stand down "honourably" before it reached that point.

Ms Park has apologised twice before, and has said she is "heartbroken" by the political crisis around her, but has refused to stand down.

In Tuesday's televised address, her third since reports of the scandal began, Ms Park said she would step down "once lawmakers come up with measures to transfer power in a way that minimises any power vacuum and chaos in governance".

A spokesman for the opposition Democratic Party, Youn Kwan-suk, said the speech was a "trick" that "lacked reflection".

"What people want is her immediate resignation, not dragging out and dodging the responsibility to the parliament," he told the Yonhap news agency.

The scandal stems from the president's relationship with her close friend, Choi Soon-sil.

Ms Choi is accused of trying to extort huge sums of money from South Korean companies. She is also suspected of using her friendship with Ms Park to solicit business donations for a non-profit fund she controlled.

She is in police detention, facing a string of charges.

The allegations have reached across South Korean politics and industry. Two of Ms Park's aides have also been charged along with a pop music producer.

The offices of the national pension fund have been raided, as have several major Korean companies including Lotte and Samsung.

Investigators said they believed Ms Park had a "considerable" role in the alleged corruption, but her representatives have said the accusations are a "fantasy".

In recent weeks, hundreds of thousands of Koreans have joined huge street protests across the country demanding that she leave office.

The BBC's Steve Evans in Seoul says her announcement is not quite a resignation, but an offer to resign later.

But it does imply, he adds, that her days in office are now severely limited.