The wife of Vladimir Putin's spokesman has drawn criticism by performing a holocaust-themed ice skating routine on Russian television. 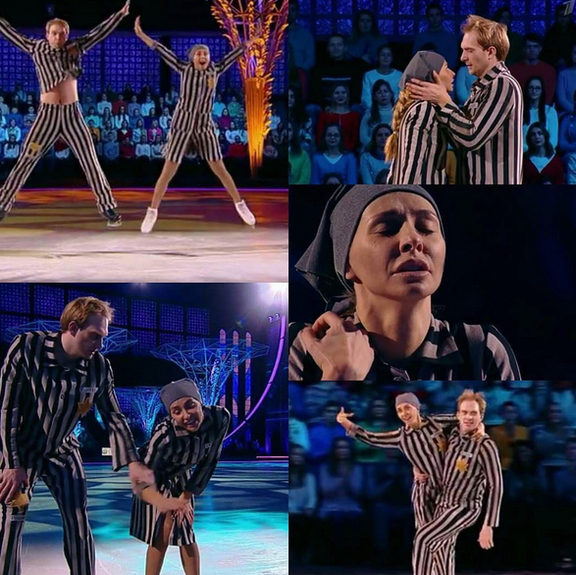 The couple performed in the striped uniform of concentration camp victims.

Ms Navka called the dance a favourite, saying it was inspired by the film La vita è bella (Life is Beautiful), which is set in a Nazi camp.

In a post on Instagram, she added: "Our children need to... remember that terrible time, which I hope, God willing, they will never know."

Ice Age is a celebrity skating contest similar to the UK series Dancing on Ice.

It is broadcast on Russia's Channel One, which is owned and controlled by the Kremlin.

Ms Navka and Mr Burkovsky performed to the song 'Beautiful that Way', the theme from Life is Beautiful.

The 1997 film is a comedy drama about an Italian bookshop who creates an imaginary world to shield his young son from the agony of life in a concentration camp.

The high-energy routine saw the skating partners pretend to shoot each other, while beaming at the audience.

Their black and white uniforms included the yellow Star of David which the Nazis forced Jewish people to wear, and fake inmate numbers.

Ms Navka, who is married to Dmitry Peskov, Mr Putin's chief spokesman, covered her hair with a scarf for the ice dance.

Posting a montage of pictures on Instagram, Ms Navka said the controversial choreography was a tribute.

"One of my most loved routines!" she wrote, "based on one of my favourite movies, 'La vita è bella!' Show this movie to your children."

One wrote: "Disgusting ignorance! You show contempt of 6 million murdered innocents and shame the Russians that helped liberate survivors too."

"Words cannot express how SICK this is," said another calling herself jewish_chick.

American comedian Sarah Silverman, who is from a Jewish background, shared a video of the dance on Twitter, writing: "OH MY GOD".

The Jerusalem Post reports that Russian TV aired a different Nazi-inspired dance number back in April.

The country's version of Dancing with the Stars featured a performance where a Nazi officer finds a Jewish woman hiding behind a piano. He decides not to shoot her, and the two start dancing to 'Fly me to the Moon' by Frank Sinatra instead.

But in the end she is killed by a bullet from the blue, leaving him screaming and shooting in mid-air.

Six million Jews were murdered by the Nazis in Hitler's death camps, along with between 140,000 and 500,000 Soviet prisoners of war.