Tens of thousands of people are being evacuated as wildfires rage through parts of Israel's third largest city of Haifa. 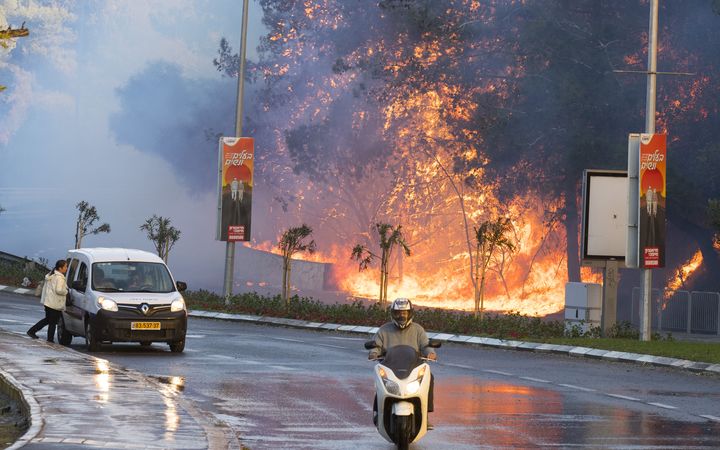 Israelis drive past a fire in the northern Israeli port city of Haifa. Photo: AFP

The fires follow a two-month drought and are being fanned by strong winds in the north of the city.

Wildfires are also threatening homes near Jerusalem and in the West Bank.

Israel's police chief said arson was suspected in some cases and PM Benjamin Netanyahu said any such attacks would amount to "terror".

"Every fire that was the result of arson or incitement to arson is terror in every way and we'll treat it as such," he was quoted by Haaretz newspaper as saying.

"Anyone who tries to burn parts of the state of Israel will be severely punished." 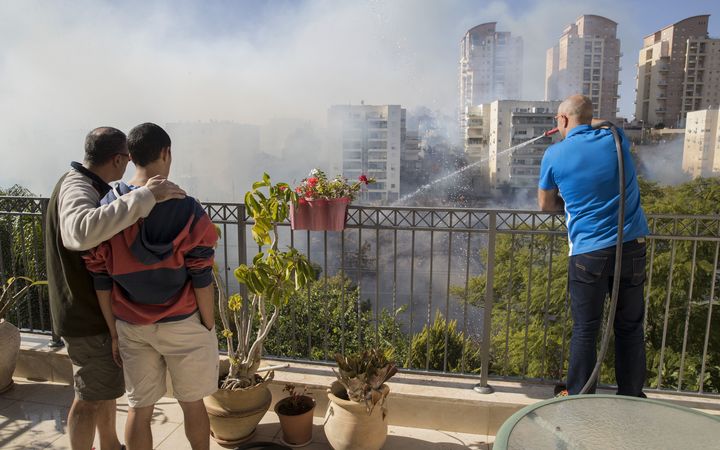 Two Israelis watch as another tries to extinguish a bushfire with a hose from a rooftop. Photo: AFP

Police chief Roni Alsheich said that if fires had been started deliberately it was "safe to assume ... it is politically-motivated''.

Education Minister Naftali Bennett, leader of the right-wing religious Jewish Home party, also appeared to suggest Arab or Palestinian involvement in the fires, writing on Twitter: "Only those to whom the country does not belong are capable of burning it."

On social media, the Arabic-language hashtag #Israel_on_fire began trending, with most tweets expressing pleasure over the outbreak.

Haifa Mayor Yonah Yahav said there were indications that one of the fires started when "someone tossed a cigarette in an area full of oil and flammable fluids" in an industrial zone.

Four Palestinians have been arrested in connection with a fire near Jerusalem and are due to appear in court, officials said.

The Palestinian Authority has offered to help Israel's fire department, a senior Israeli security official told the BBC, but has not yet received a reply.

Meanwhile, hundreds of military reservists have been called up to help battle the three-day outbreak of fires.

More than 130 people have been taken to hospital with minor injuries, mainly from smoke inhalation, but most were later discharged, Haaretz reported.

Haifa municipality spokeswoman Or Doron told AFP news agency that 50,000 of the city's residents had left their homes.

People loaded up supermarket trolleys with belongings, while schools, kindergartens, universities and an old people's hospital were evacuated. 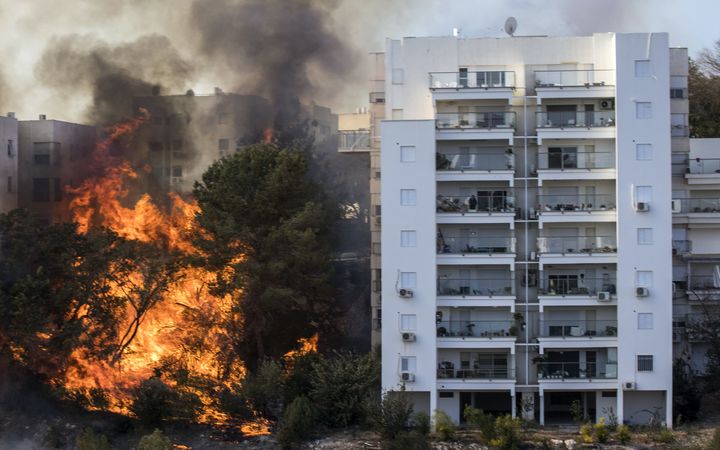 A fire rages next to an apartment building in Haifa. Photo: AFP

Further south, Highway 443 - which links Jerusalem and Tel Aviv, crossing through the West Bank - was closed to morning traffic on Thursday as another blaze reached the city of Modi'in.

Homes and cars were damaged, and 300 students were evacuated from a school, in Talmon, an Israel settlement in the occupied West Bank, police said.

Firefighters have been battling fires in several locations since Tuesday and forecasters are warning that the dry conditions and strong winds are likely to continue until early next week.

Several countries - including Cyprus, Russia, Italy, Croatia and Greece - have sent help and equipment, including aircraft, to help tackle the blazes.

Mr Netanyahu said officials were also contacting the US company which operates a huge firefighting plane known as the "Supertanker".