Two French tourists who died within minutes of each other while snorkelling on the Great Barrier Reef are likely to have been stung by the Irukandji jellyfish, a cardiologist says.

The pair, aged 74 and 76, suffered heart attacks and died in the water at Michaelmas Cay, east of Cairns, Australia, on Wednesday.

One was wearing a stinger suit, one was not, however both tourists had pre-existing medical conditions, the ABC understands.

Cardiologist Dr Ross Walker said it was highly unlikely two people would die in such quick succession, regardless of their health.

"I think it's highly likely they were stung by Irukandji," Dr Walker said.

"Irukandji are the size of your little fingernail, they're very small, you can't see them.

"Let's look at fact and probability." 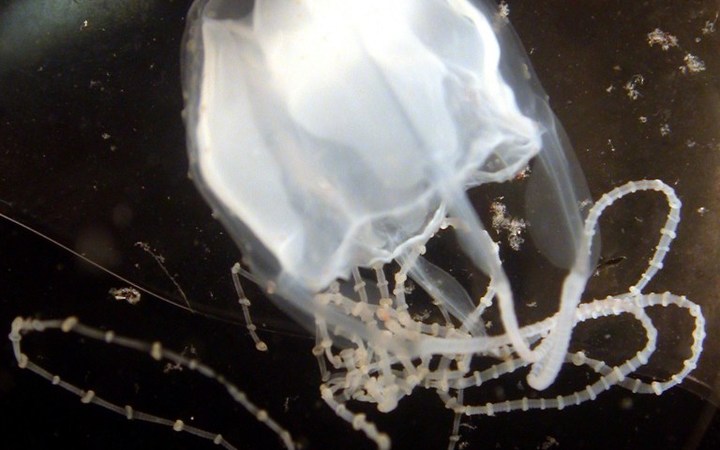 The Irukandji jellyfish is one of the world's most venomous creatures. Photo: AFP

The Irukandji is one of the world's most venomous creatures.

Dr Walker said its toxin can take time to manifest, and can send the body into cardiac arrest.

"The point is it doesn't happen as soon as you're stung, it can wait 15 or 20 minutes before it actually impacts on the body," Dr Walker said.

He said crew members from the Passions of Paradise tour boat were in the water with their passengers.

"Environmental issues played no role in this whatsoever. Nobody else saw any jellyfish, nobody else got stung," Mr McKenzie said.

He said the crew handled the situation well.

"To have two separate incidents occur within 10 minutes of each other is unheard of," he said.

"I've had 35 years in the industry and I've never heard anything like that."

Deputy Premier Jackie Trad expressed her condolences to the families of the tourists and those travelling with them.

She said it was important to consider all of the factors that contributed to the incident, but defended the region's safety record

"It is absolutely safe," she said.

"It is a world icon and we encourage lots of people to come to Queensland to look at the reef.

"We will have a look at all of the factors that contributed to these fatalities but right now our condolences and sympathies go to the friends and families."