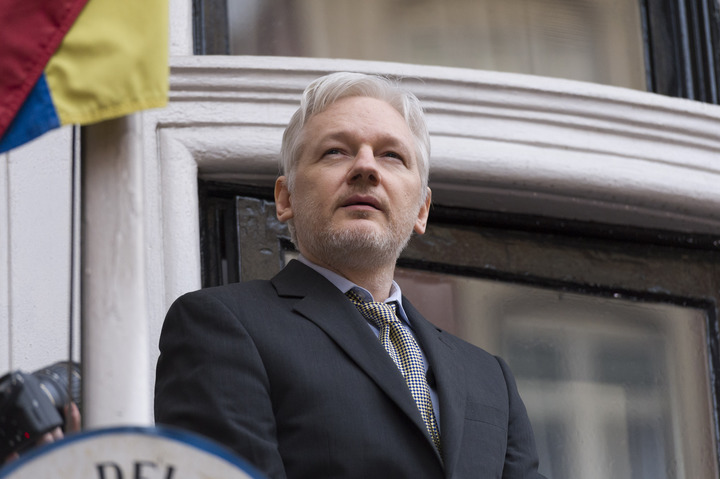 He denies the allegation that he raped a Swedish woman in 2010.

He took refuge in the embassy four years ago, fearing extradition. He says the sex was consensual and believes the allegations are politically motivated.

The accusations relate to a visit Mr Assange made to Stockholm in August 2010 to give a lecture.

Ms Isgren and Swedish police inspector Cecilia Redell left the embassy at 1.30pm local time without making any statement to the media. They may continue questioning Mr Assange for several days.

Mr Assange has refused to travel to Sweden for questioning, citing concerns he would be extradited to the US over Wikileaks' release of 500,000 secret military files on the Afghanistan and Iraq wars. However, lawyers argue that his extradition from Sweden would be even less likely than from the UK.

Mr Assange is accused of raping a woman, named in legal papers as SW, at her home in August 2010.

Swedish prosecutors dropped part of their investigation last year because of a statute of limitations.

Mr Assange is "not hiding" at the embassy, but he will not go to Sweden because he would thereby risk losing his Ecuadorean asylum status, his lawyer Jennifer Robinson told the BBC on Monday.

"Sweden refused to provide assurances against onward extradition to the United States," she said, accusing the Swedish authorities of "dragging their feet" over the case.

It's taken many months of tortuous diplomatic and legal exchanges just to get the Swedish prosecutor in the door.

Under the agreement worked out with Ecuador, the Swedes were not allowed to question Julian Assange directly. Instead questions were to be submitted in Spanish and put to the Wikileaks founder by an Ecuadorean prosecutor.

No follow-up questions were allowed.

This may explain why the Swedish prosecutor had been reluctant to question Julian Assange in London, insisting it would "lower the quality of the interview". She changed her mind in March 2015, a few months before lesser allegations made against Julian Assange had to be dropped because of a time limitation.

At the embassy Mr Assange is beyond the reach of the UK authorities. Sweden has issued an arrest warrant for him, which he has appealed against.

A statement on behalf of the Swedish prosecutors, quoted by the Press Association, said the investigation would remain confidential.

"Therefore, the prosecutors cannot provide information concerning details of the investigation after the interview," it said.

One of Mr Assange's lawyers, Per Samuelson, said his client "is very happy that he finally will be given the opportunity to give his statement to the Swedish prosecution.

"He has been waiting for this for over six years. He has prepared himself very carefully and will give a statement and will co-operate to the full extent."