Republican Donald Trump was rushed off stage by security agents at a rally in Reno, Nevada, after a perceived security threat as he and Democrat Hillary Clinton swept across states that could prove decisive in Tuesday's presidential election. 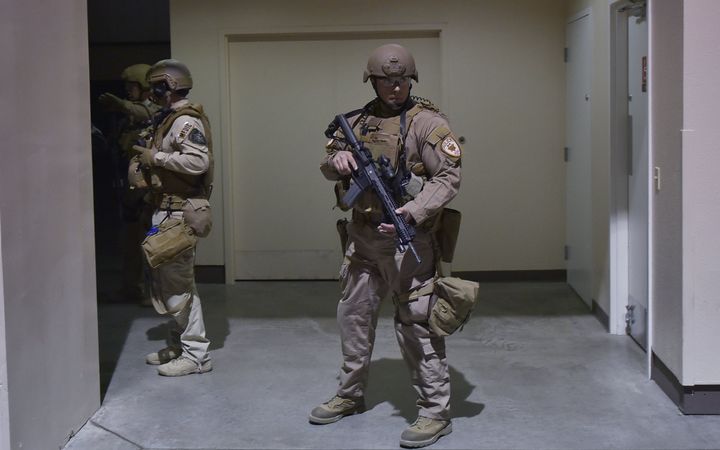 Police outside a bathroom where a protestor was being held after Donald Trump was escorted off stage during the rally. Photo: AFP

The threat was unclear. Two security agents seized Mr Trump by the shoulders and hustled him backstage as police officers swarmed over a white male in the front of the crowd and held him face down on the ground while they searched him.

Moments later, the man was escorted by police away with his hands behind his back. Mr Trump, seemingly unruffled, returned to the stage and continued his campaign speech.

"Nobody said it was going to be easy for us," he said. "But we will never be stopped."

The incident began when Mr Trump noticed what he considered a heckler, saying it was someone "from the Hillary Clinton campaign." A few seconds later people near the stage began pointing at someone in the crowd near the front.

Then agents took Mr Trump away. A CNN reporter at the event who spoke to witnesses to the incident said no one saw a weapon.

In a statement, Mr Trump thanked the Secret Service, Reno and Nevada law enforcement for "their fast and professional response."

The incident occurred as Clinton and Trump make their closing arguments to American voters, criss-crossing the United States in hopes of winning over last-minute undecided voters and rallying their bases to turn out enthusiastically on election day.

In Philadelphia, pop singer Katy Perry performed at a Clinton rally, the latest in a string of celebrity appearances aimed at getting out the vote among millennials.

"When your kids and grandkids ask you what you did in 2016, when it was all on the line, I want you be able to say you voted for a better, stronger, America," said Hillary Clinton.

Opinion polls show Mrs Clinton still holds advantages in states that could be critical in deciding the election. But her lead has narrowed after a revelation a week ago that the Federal Bureau of Investigation was looking into a new trove of e-mails as part of its probe into her handling of classified information while she was secretary of state.

Both candidates spent time in Florida, considered one of the most hotly contested states. The 2000 presidential election was decided in Florida after a dispute over votes and recounting of ballots went to the US Supreme Court, which ruled in favour of Republican George W. Bush over Democrat Al Gore.

The Real Clear Politics average of Florida opinion polls found Mrs Clinton with a lead of about 1 percentage point - indicating the race there is a virtual tie. 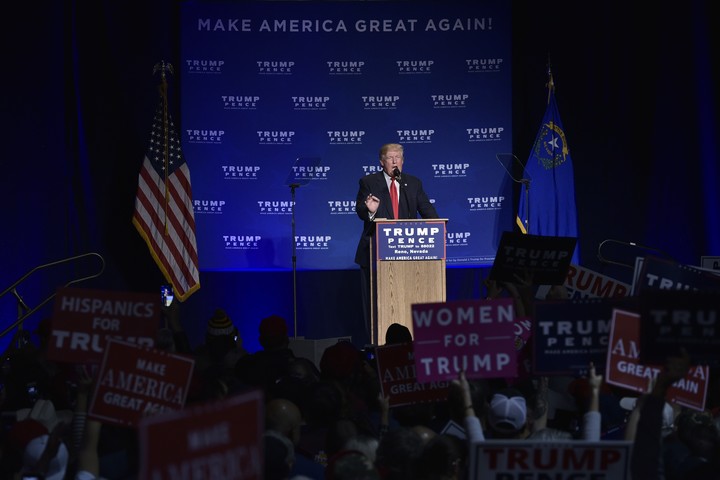 Donald Trump speaks upon his return after being escorted away when a protestor approached the stage. Photo: AFP

Mr Trump spoke at a rally on Saturday morning in Tampa, Florida, where he continued to criticize Hillary Clinton for supporting the Affordable Care Act, also known as Obamacare, in the wake of an announcement that premiums are going to rise next year.

"It's not going to matter because if we win I'm throwing it out anyway," Mr Trump said.

Shortly before Mrs Clinton took the stage in Pembroke Pines, Florida, rained poured down. People in the crowd waiting for Mrs Clinton at the outdoor rally remained in place, taking out umbrellas and fashioning garbage bags into head coverings.

"I'm thrilled to be here and boy is this a hardy group, rain or shine you are ready," Mrs Clinton said, her voice cracking with hoarseness.

She cut her speech short as she became soaked in rain, saying, "I don't think I need to tell you all of the wrong things about Donald Trump."

At the JFK library in Hialeah, Florida, people lined up outside for early voting. Nearby, supporters of both candidates waved signs and shouted slogans, urging passing drivers to honk their horns.

"We want someone to come in and clean house," said Cuban-American Ariel Martinez, 42, a Trump supporter.

Early voting began in September and the data firm Catalist estimates more than 30 million ballots have been cast in 38 states. There are an estimated 225.8 million eligible US voters. Saturday was the final day for early voting in many Florida counties.

Trump and Clinton campaigns adjusted travel schedules for the next two days to states where they saw opportunity.

Mr Trump told the crowd in Tampa that there would be a campaign event in Minnesota this weekend, although one had not previously been scheduled. Minnesota has not voted for a Republican since 1984. His campaign confirmed a rally scheduled for Wisconsin on Sunday has been cancelled.

She then visited her campaign's office in Little Haiti where there is a large concentration of Haitian-American residents. Mrs Clinton was joined by Sybrina Fulton, the mother of Trayvon Martin, the unarmed black teenager who was shot dead in 2012 by a Sanford, Florida neighbourhood watchman, George Zimmerman.

In what was seen as an effort to defend typically Democratic turf, Mrs Clinton on Monday will campaign in Grand Rapids, Michigan, before returning to Pennsylvania for a rally in Philadelphia with President Barack Obama and first lady Michelle Obama, and former President Bill Clinton.

Mr Trump is to make stops on Sunday in Iowa, Minnesota, Michigan, Pennsylvania and Virginia to try to steal away some states that have gone Democratic in recent presidential elections.