An Australian hiker who was lost in a remote Malaysian national park for two weeks says he resorted to eating wild ferns to survive. 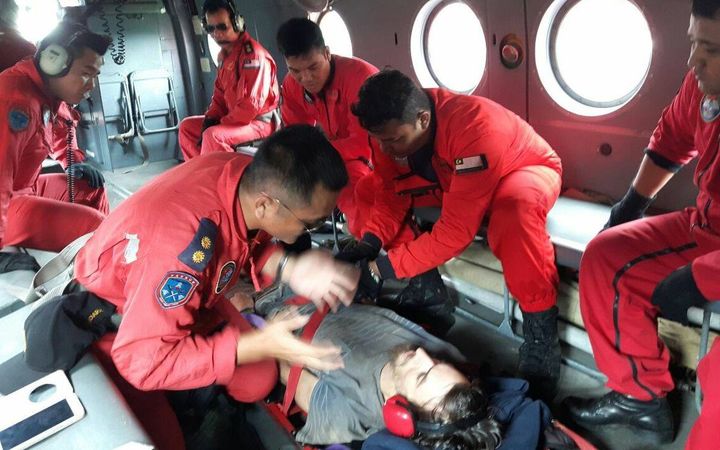 Australian hiker Andrew Gaskell is rescued after getting lost in the Malaysian forest. Photo: Facebook / Sarawak Fire and Rescue department

Andrew Gaskell set off on a solo hike on 18 October up the 2376m summit of Mt Mulu and made it most of the way back out before getting lost. He was found by a Malaysian search team on Tuesday.

"Obviously I'm quite starving but apart from that I'm really happy to be alive," the 25-year-old told the ABC by phone from Miri Hospital, in Malaysia's Sarawak region.

"These last few days I picked up a few wild ferns from the jungle, aside from that I ate virtually nothing - I was getting weaker and weaker every day.

"By the end of it I was quite concerned I wouldn't make my 26th birthday."

Aside from hunger, Mr Gaskell said he had infected cuts on his feet, and was "bitten by a lot of things" but had sustained no major injuries.

"At the base [of the mountain] there's lots of parallel trails and creek crossings that make the track quite confusing," he said.

"The sun was just setting at that time [and] I managed to get myself lost.

"I ended up spending that whole night just wandering and really got myself badly disorientated."

The area is famous for its cave systems and there were growing fears for Mr Gaskell's safety, although he was slow to realise the seriousness of his predicament.

"It actually took me a while to be concerned - I must be more optimistic than I thought," he said.

"If I had a GPS or better navigational equipment I would have been fine, but it was extremely stupid of me really."

Mr Gaskell apologised for the worry he caused to his family and thanked the Malaysian authorities.

"The rescue staff have been amazing, as have the hospital staff," he said.

He was resting at Miri Hospital but said he wanted to continue his travels in Sarawak and Sabah.

Mr Gaskell's mother, Elizabeth, said she was relieved he was safe and hoped to see him before he continued on his travels.

"He's an adult so he has to make his own decisions," she said.

"Obviously I'd like to see him before he decided to do that again and I'd want him to be a little bit more on the careful side I'd say."

She always believed her son was alive.

"I just had an amazing faith in God, I'm a Christian and I just held strong on to the word of God during that time, believing that he would come out alive no matter how it appeared to be."