Women and girls in several camps in the Nigerian town of Maiduguri are being sexually abused by officials, a rights group says.

Human Rights Watch (HRW) said it had spoken to 43 victims who had been raped or sexually exploited by vigilante groups and security officials.

The president has ordered an investigation into the alleged abuses. 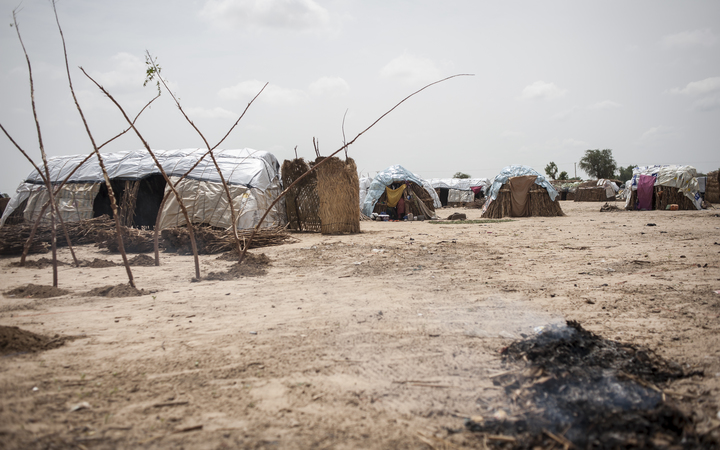 An informal settlement, near the Maiduguri capital of Borno, for people displaced by Boko Haram. Photo: AFP

Many of those forced from their homes have fled to camps around the Borno state capital, Maiduguri.

However, the HRW report says some of them have suffered abuse in those camps.

Some said they had been coerced into sex and abandoned when they became pregnant.

"It is disgraceful and outrageous that people who should protect these women and girls are attacking and abusing them," said HRW's Mausi Segun.

The group said irregular supplies of food, clothing, medicine and other essentials in internally displaced camps in Maiduguri had made women and girls - many of whom are widows and unaccompanied orphans - more vulnerable.

In response to the report, President Muhammadu Buhari said he was "worried and shocked" and vowed to protect those in the camps.

He ordered the police and state governors to investigate.

Hundreds of refugees, including children, starved to death in one of the camps earlier this year, causing a "catastrophic humanitarian emergency", according to medical charity Medecins Sans Frontieres.

Four people told HRW they had been drugged and raped; 37 others said they had been coerced into sex through false marriage promises and material and financial assistance.

A 16-year-old girl who fled a brutal Boko Haram attack on Baga in northern Borno in January 2015 said she had been drugged and raped by a vigilante in charge of distributing aid in the camp.

"He would bring me food items like rice and spaghetti so I believed he really wanted to marry me," the girl said.

"But he was also asking me for sex. I always told him I was too small [young]. The day he raped me, he offered me a drink in a cup. As soon as I drank it, I slept off.

"I knew something was wrong when I woke up. I was in pain and blood was coming out of my private part. I did not tell anyone because I was afraid," she recounted.

She said she became pregnant but her attacker fled the camp when he heard she had delivered.