The family of a New Zealand woman who died with three others in an accident on an Australian theme park ride say they are devastated by her death. 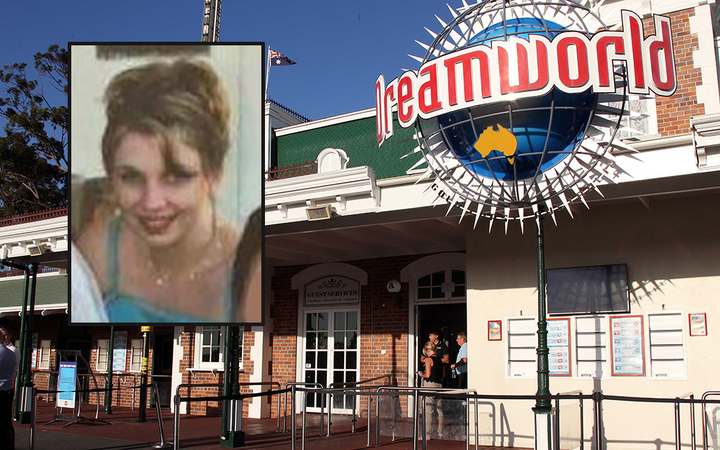 Cindy Low, inset, was one of four victims who died after a ride malfunctioned at Dreamworld on Australia's Gold Coast. Photo: AFP / Facebook

Cindy Low, 42, was killed along with Australians Kate Goodchild, her brother Luke Dorsett and his partner Roozbeh Araghi when the ride at Dreamworld on the Gold Coast malfunctioned just after 2pm (5pm NZT) on Tuesday.

Ms Low has been reported as being originally from Kawerau and a long-term resident of Australia.

In a statement, her family said they were devastated and traumatised by her death and asked for privacy.

Authorities said the disaster occurred when two rafts hit one another at the end of the ride, tipping one backwards.

Two people were flung from the raft and two became trapped on the conveyor belt of the ride, which was marketed as a family-friendly thrill that two-year-olds were allowed on.

A boy and a girl, aged 10 and 12, were on the same raft but managed to escape "through the providence of God or somebody", Police Assistant Commissioner Brian Codd said.

The ride will likely remain a crime scene for two or three days, and police said they would not rush the investigation.

Dreamworld chief executive Craig Davidson joined a group of staff in laying a wreath near the park entrance this afternoon.

He said the two young children who survived would have the park's full support in the future.

Tributes for Ms Goodchild, Mr Dorsett and Mr Araghi have emerged from federal government departments in Canberra, where the siblings worked for the Department of Human Services and Mr Araghi with the Australian Bureau of Statistics.

Federal senator Sam Dastyari and broadcaster Patricia Karvelas were two of the many friends who paid tribute to the Canberra family.

The senator said he was raised alongside Mr Araghi, known as Roozi, whose father helped paved the way for his own move from Iran to Australia.

"I'm devastated that such a caring, loving, sweet and sensitive friend has been lost," Mr Dastyari wrote on Twitter.

"I'm angry that this could happen at a venue like Dreamworld."

In a statement, the Australian Bureau of Statistics said the organisation was devastated, describing Mr Araghi as a hardworking member of the communications team "who brought joy and fun to the workplace".

He had also edited the University of Sydney student newspaper, Honi Soit, in 2000.

Ms Goodchild and Mr Dorsett worked at the Department of Human Services.

WATCH: A New Zealand woman tells Checkpoint there were technical issues on the same ride when she was on it last week:

The department said staff were "in mourning after losing two valued employees".

"Kate and Luke were well-liked and respected by their colleagues and will be greatly missed," Department of Human Services secretary Kathryn Campbell said in a statement.

"I would like to offer my heartfelt condolences to the families, friends and colleagues of Luke and Kate at this devastating time."

ABC radio presenter Patricia Karvelas was friends with Mr Araghi and Mr Dorsett, who she said were the most loyal of friends.

"They never missed one of my girls' birthdays. They never forgot to check in," she said. "Words fail me."

The Chaser co-founder Dominic Knight, who went to university with Mr Araghi, praised his wit and love of music.

"A passionate, funny, brilliant man with an unquenchable love of retro pop," he wrote on Twitter.

ACT Chief Minister Andrew Barr also offered his personal condolences to the families involved on behalf of all Canberrans, saying many in the community had "been impacted by this terrible news".