It was "almost a miracle" that two young children escaped unharmed from the Dreamworld ride that killed four adults, Queensland police say. 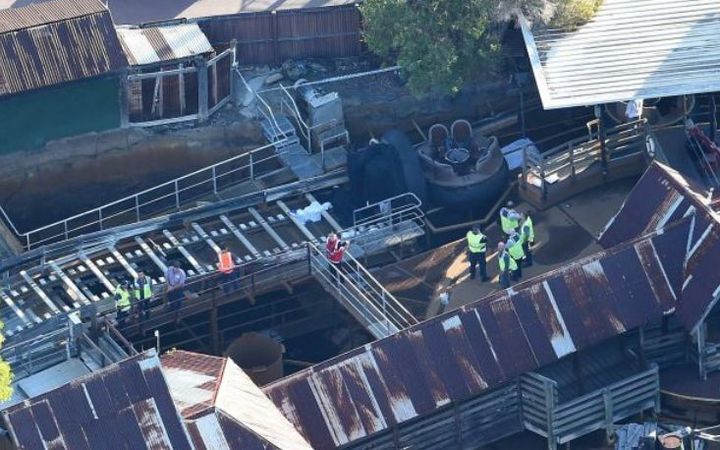 State police have held a media conference about yesterday's tragedy at the Gold Coast theme park.

Assistant Commander Brian Codd said four adults and two children were on a raft on the Thunder River Rapids Ride when it flipped at the very end of the ride.

All four adults were killed but a 10-year-old boy and 12-year-old girl managed to escape, Mr Codd said.

"[It's] almost a miracle that they escaped unharmed."

Police corrected their earlier statement that the two children were two girls aged 10 and 13.

The accident was an "unexpected and terrible tragedy", Mr Codd said.

"Coming to a place where families want to come and enjoy each other's company and just have fun doesn't really equate to such a tragedy as we've seen.

"[It was] traumatic for the children involved. They are being provided with extensive support."

One of the four adults killed was a 42-year-old New Zealand woman who had lived in Australia for some time, the Ministry of Foreign Affairs and Trade has confirmed.

Queensland police would not confirm any of the victims' identities, saying officers first needed to notify their next-of-kin.

The tragedy had had a "deep and emotional impact" on the community, the victims' families and first responders, Mr Codd said.

"We are providing maximum support to all involved."

A thorough investigation had begun into what caused the accident and "full coronial process" would be followed, he said.

Police were still conducting interviews with witnesses, while a team of 30 detectives would also be looking at the operation and maintenance of the ride and its machinery.

The victims' families deserved to have answers about what happened, Mr Codd said.

"We owe it to the community of Queensland to get to the bottom of what caused this [and] to hold accountable any person that needs to be held accountable for this occurring, if that is the case, but most particularly ensuring that this can never happen again."

House of Travel said it had contacted about a hundred clients with pre-booked tickets to DreamWorld over the next month.

Marketing manager Ken Freea said they would be offered a full refund.

Flight Centre said it would be contacting its customers with packaged holidays and tickets to DreamWorld, but was still working out whether it would offer a refund.

About 190,000 New Zealanders visit the Gold Coast each year.

Chief executive Chris Deere said while he was confident all of the park's rides were safe, he had spoken this morning to WorkSafe New Zealand about the incident.

"The independent engineer is coming out to the park and we are just going to talk through the incident and DreamWorld," he said.

Mr Deere said all rides were checked daily, were independently asssessed regularly and signed off by WorkSafe.

"We are very confident in our processes here, but again it's just ensuring we are doing everything as diligently as we can."