A group of 26 hostages held for nearly five years by Somali pirates has arrived in Kenyan capital Nairobi after being freed. 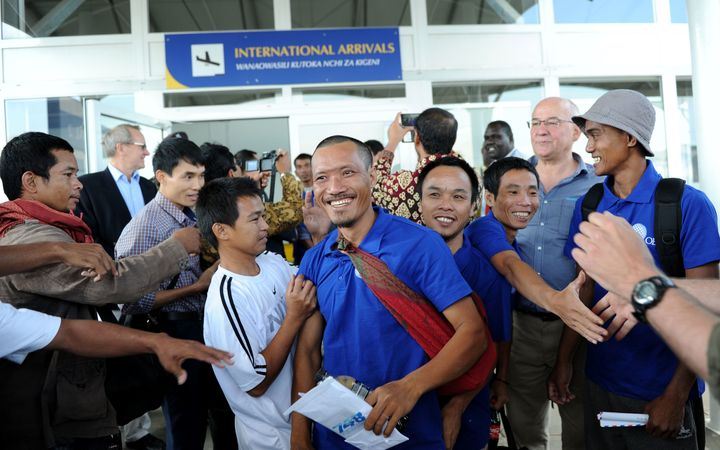 One of the hostages who had been held by Somali pirates for nearly five years reacts after arriving safely in Nairobi, Kenya. Photo: AFP

The crew from China, the Philippines, Cambodia, Indonesia, Vietnam and Taiwan were seized when the Omani-flagged FV Naham 3 was hijacked by Somali pirates close to the Seychelles in March 2012, when pirate attacks were common in the area.

The pirates handed the group to authorities in the northern Somali town of Galkayo on Saturday morning.

"I don't know what is on the outside of this world," one of the released hostages, from the Philippines, said.

It was not known if any ransom was paid but the ship had no value, and neither the crew nor the ship were insured.

Flights back to their home countries were being organised for the group, whose period of captivity was one of the longest among hostages seized by Somalian pirates.

The sailors were held in Dabagala near the town of Harardheere, 400km northeast of the capital Mogadishu. 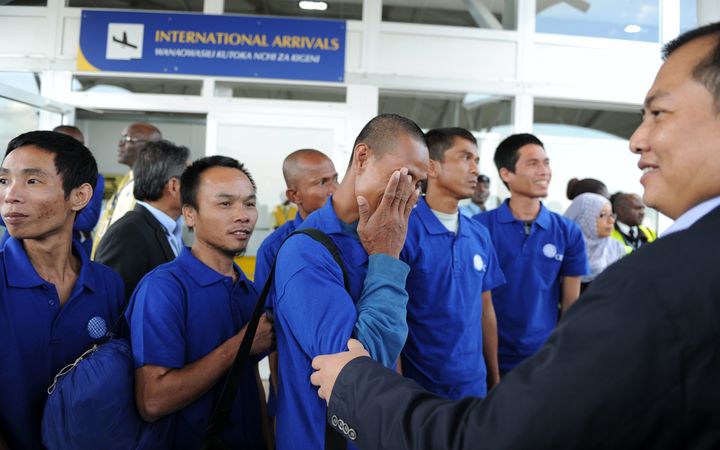 Harardheere became known as Somalia's main pirate base at the height of the crisis.

The Oceans Beyond Piracy group said the crew were brought ashore by pirates when their ship sank more than a year after its hijacking.

"It is great to be here today and to bring them home and to hand them over to their embassies and their families," the group's East Africa manager John Steed said.

"We have achieved what we have achieved by getting tribal elders, religious leaders, the community and regional government all involved to put pressure on these guys to release these hostages," he said at Nairobi's airport, where the sailors arrived on a United Nations humanitarian flight.

Piracy off Somalia's coast has subsided in the past three years, mainly due to shipping firms hiring private security and the presence of international warships.

The wave of attacks had cost the world's shipping industry billions of dollars as pirates paralysed shipping lanes, kidnapped hundreds of seafarers and seized vessels more than 1000 miles from Somalia's coastline.