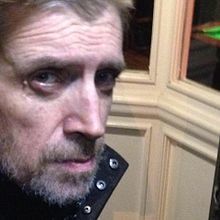 He was best known for his US collaborations with writer Garth Ennis, creating classic cult comic titles.

In his Twitter profile, Dillon, originally from Luton, describes himself as: "A comic book bloke. Co-creator/Artist of Preacher. Co-founder/Editor of Deadline magazine. Artist on Punisher, Judge Dredd and many others."

His brother Glyn, also a graphic novel author, confirmed the death on Twitter, saying his "big brother and hero" had died in New York City.

Sad to confirm the death of Steve, my big brother and my hero. He passed away in the city he loved (NYC). He will be sorely missed. Cheers x

Dillon was born in Luton in Bedfordshire in 1962. When he was 16 he embarked on his first professional job, drawing the character Nick Fury for Hulk Weekly.

In the 1980s his career started to take off and he regularly contributed to Doctor Who Magazine, creating the character Abslom Daak.

More work followed and he was on the comic anthology Warrior from its inception in 1982.

He also drew for the British sci-fi and fantasy comic 2000AD, where he was perhaps best-known for his work as an artist on Judge Dredd.

Dillon arrived in the United States in the late 1980s, where some of his most popular strips were created.

The Hollywood Reporter said it was at DC's Vertigo imprint that he collaborated with author Garth Ennis, first on the critically acclaimed Hellblazer and then on Preacher.

We lost a giant among creators and artists today. Steve Dillon will be missed by us all here at DC and Vertigo. pic.twitter.com/ZpYVQBgwwf

The Preacher strip inspired the US television series of the same name. In a statement, TV company AMC said: "Steve Dillon was an enormously talented illustrator who, with Garth Ennis, created a cult classic comic we were so proud to bring to television."

Dillon and Ennis then worked together on multiple series of the Punisher at Marvel, who have described the artist as "a great storyteller" on Twitter, and said they will remember his "incredible work".

On his blog of British comics, Lew Stringer who describes himself as one of Dillon's "legions of fans", paid tribute, saying he had: "A natural talent for drawing pages that were easy on the eye and told the story superbly with a fantastic drawing ability."