Scientists are uncertain whether a European Mars lander touched down safely or broke apart, after it did not behave as expected during its descent.

The Schiaparelli probe, part of a broader mission to search for evidence of life on the Red Planet, was to test technologies during the descent and on the surface for a rover scientists hope to send to Mars in 2020. 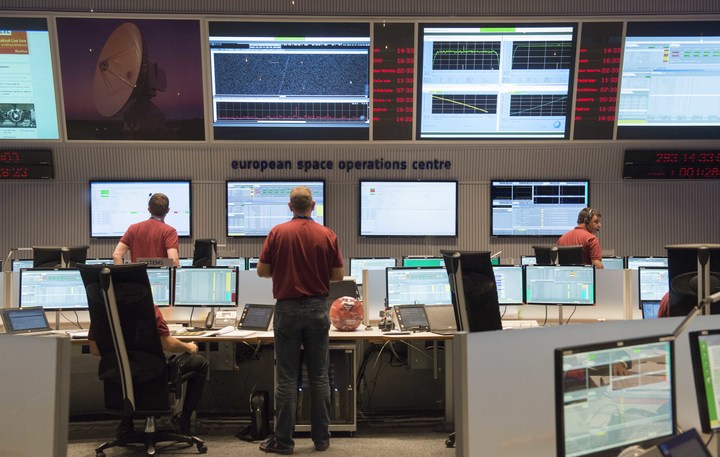 Engineers stand in the main control room of the European Space Agency prior to the expected landing of Schiaparelli. Photo: AFP

Data recovered from the probe during its descent indicates that its parachute was jettisoned too early.

The rockets it was supposed to use to bring itself to a standstill just above the ground also appeared to fire for too short a time.

Its descent marked only the second European attempt to land a craft on Mars, but it has shown no signs of life since it stopped transmitting around 50 seconds before its planned touchdown.

The disc-shaped 577kg Schiaparelli is part of the Russian-European ExoMars programme that is seeking signs of life.

The primary part of the mission this year, bringing the Schiaparelli lander's mothership into orbit around Mars, was meanwhile a success.

That craft, called Trace Gas Orbiter, will use an atmospheric probe to sniff out methane and other gases around Mars linked to organic life. It will also act as a data relay station for the rover, which is due to follow in 2020.

Landing on Mars, Earth's neighbour and at its closest some 56 million km away, is a notoriously difficult task that has thwarted most Russian efforts and given NASA trouble as well.

The US space agency had a setback of its own on Wednesday. Its Juno spacecraft lost its main computer and science instruments shortly before it was due to make an orbital pass near Jupiter, scuttling highly anticipated close-up observations of the largest planet in the solar system. There has been contact with the Mars lander Schiaparelli since it behaved unexpectedly during its descent to the Red Planet. Photo: AFP Photo / European Space Agency / D. Ducros

Schiaparelli is supposed to test new technologies for a rover that will be the first with the ability to both move across the surface of Mars and drill into the ground to collect and analyse samples.

Scientists said they had received data from the lander covering its entry into the Martian atmosphere and the deployment of its heat shield and parachute, which were designed to slow it from a speed of 21,000 km per hour.

But its thrusters appeared to have fired for only a few seconds, much shorter than expected, and scientists are not sure how far off the ground Schiaparelli was when they shut off.

"We need to understand what happened in the last few seconds before the planned landing," ESA director of human spaceflight and robotic exploration David Parker said.

Scientists will analyse all the data received so far, and also still hope to re-establish contact with the lander before its batteries run out in a few days.

Britain's Beagle 2 never made contact after being sent down by the Mars Express spacecraft in 2003 and failing to deploy its solar panels on landing.

Mars's hostile environment has not detracted from its allure, with US President Barack Obama recently highlighting his pledge to send people to the surface by the 2030s.

Entrepreneur Elon Musk's SpaceX is developing a massive rocket and capsule to transport large numbers of people and cargo to Mars with the ultimate goal of colonising the planet.

ESA astronaut Alexander Gerst, who is set to become the first German commander of the International Space Station in 2018, said the ExoMars mission would provide important clues on what conditions the first humans travelling to Mars would face.

"Eventually, though, we will need to go there ourselves as scientists to find out what is there," he told Reuters.