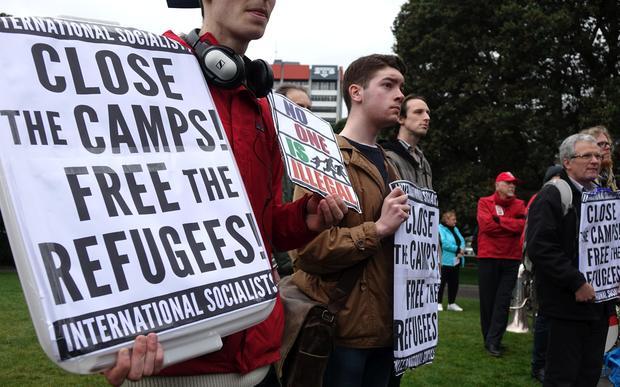 Protestors call for an end to Australia's offshore detention camps at a protest outside Parliament in Wellington this year. Photo: RNZI/Sally Round

The human rights advocacy group has issued a report that says Australia's treatment of all its 410 detainees on Nauru - 55 of which are children - amounts to torture.

She said Australia had put them there with the specific intention that they should suffer.

"The system is illegal and we show in our report in great detail how Australia is violating its multiple international obligations, including an obligation not to torture," she said.

"There are lawyers who are communicating with the International Criminal Court - it's not Amnesty International yet, but we are in touch with them as well, who believe there is enough evidence for the ... court to investigate Australia's offshore processing."

She said New Zealand should take a lead in exerting international pressure on Australia.

New Zealand offered in 2013 to take 150 of the detainees on Nauru, but Australia said it must deal direct with Nauru. The New Zealand government has said it won't consider a separate settlement with the island.

Dr Neistat said New Zealand had a crucial role as one of Australia's key partners.

"International pressure should start from the region where New Zealand is undoubtedly the most serious player, who could challenge Australia's policy, and to a certain extent show to Australia that things can be done differently."

"I refute categorically both on behalf of my own department and by way of displaying government policy in this regard that it's not the Australian government's position, nor the position of this deptartment, that we flout any laws international or otherwise."