Angry Haitians have looted aid trucks as the United Nations secretary general visited parts of the country hit by Hurricane Matthew, which killed more than 900 people. 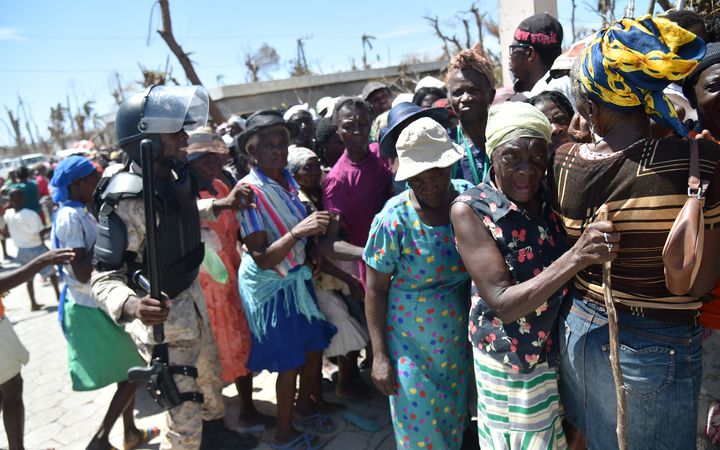 A Haitian policeman tries to keep Hurricane Matthew victims in order as they wait to receive food from the UN's World Food Programme in Roche-a-Bateaux, in Les Cayes. Photo: AFP

There are also fears of a cholera outbreak, with spikes in cases and deaths reported in the south west.

The waterborne disease reached the island via Nepalese UN troops after the deadly earthquake in 2010, causing the deaths of nearly 10,000 people.

Tensions have been high as help has yet to reach many families whose crops and water supplies have been destroyed.

Haitian police and UN peacekeepers used tear gas to disperse a group of 100 residents who attacked humanitarian convoys in Les Cayes on Saturday. 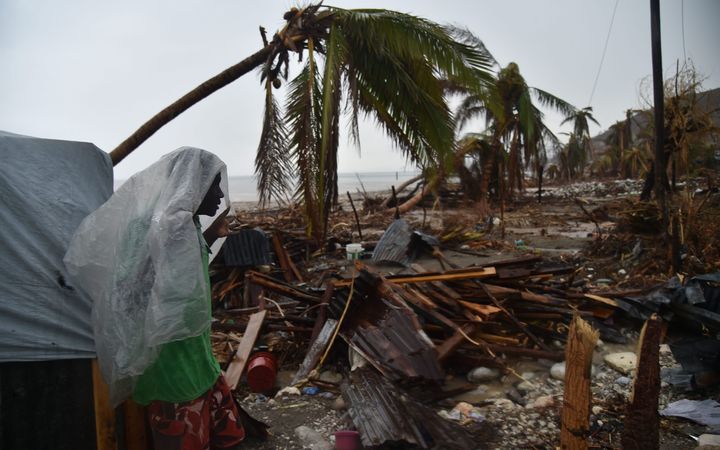 Hurricane Matthew victim James stands under the rain in front of his destroyed house in Port-a-Pimet, Les Cayes. Photo: AFP

"We understand the impatience and the anger of the population who are waiting for emergency relief. We are doing all we can to facilitate the arrival of the assistance soon as possible," Mr Ban said.

He flew over areas hit by the hurricane alongside Prime Minister Enex Jean-Charles.

"I was very, very sad when we saw the complete devastation. But people the world over stand with you," the UN chief added.

"We are going to mobilize as many resources and as much medical support as we can to first of all stop the cholera epidemic and second support the families of the victims."

About 120,000 homes were either damaged or destroyed when category-four Hurricane Matthew swept through on 4 October with winds of 230km/h.

Mr Ban visited a shelter in Les Cayes and told the displaced "kembe fem" in Creole, meaning "hang in there". 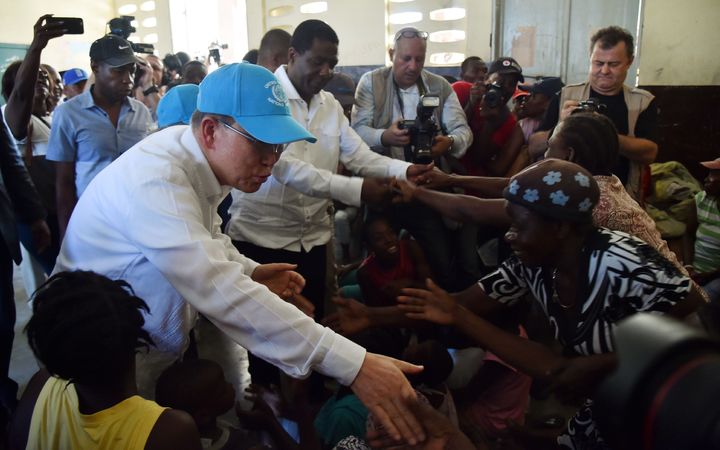 UN secretary general Ban Ki-moon visit a shelter in the Lycee Phillipe Guerrier in the city of Les Cayes in the wake of Hurricane Matthew. Photo: AFP

In the town, one of the worst affected by Matthew, the streets have been cleaned and businesses have reopened.

But power, transport and communications links are still difficult in other areas.

Last week, Mr Ban called for a "massive response" to help the country, the poorest in the Americas.

The UN launched an emergency appeal for nearly $120m (£97m) in aid, but just a fraction of it has been raised.

Mr Ban acknowledged there was aid "fatigue", but urged countries to help Haiti.