Nine Australians who stripped at the Formula One in Malaysia at the weekend have been charged with public nuisance but are free to leave the country after apologising. 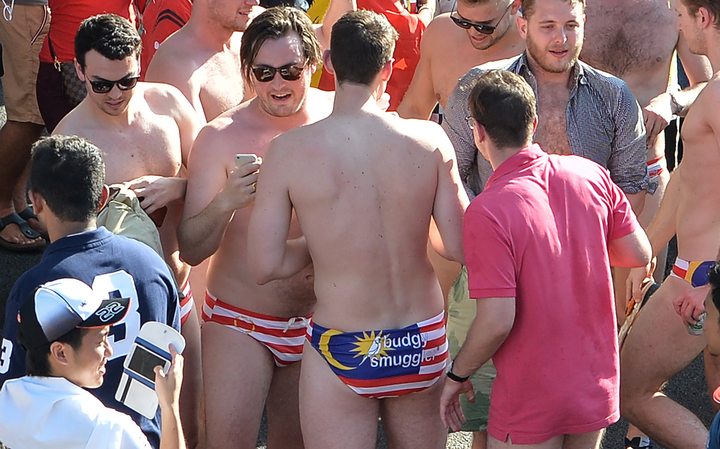 Spectators - reported to be Australian tourists - with swimwear featuring the Malaysian flag during the Formula One Malaysian Grand Prix in Sepang on 2 October. Photo: AFP

The charge carries a fine but no jail time, and no conviction was recorded.

The men, aged between 25 and 29, have spent four nights in two cells at the Sepang police station, near the race track where they were arrested on Sunday.

The prosecution had considered more serious charges relating to insulting the national emblem but they were not pursued.

The men were also investigated for intentional insult - a charge that carries a minimum fine and a maximum two years in jail.

The men read a letter to the court apologising for their behaviour and expressing remorse.

One of the men, Thomas Whitworth, fainted during the proceeding. The men were then given water and their handcuffs removed.

Evidence before the court included the nine pairs of swimming trunks bearing the Malaysian flag.

The group arrived at the Sepang court just after 9am local time (2pm NZT), and were taken to a court cell amid a large media pack.

The father of Jack Walker - one of the men arrested and a staffer of Defence Industry Minister Christopher Pyne - travelled to Malaysia to support his son.

The men stripped down to Malaysian-flag-printed swimwear - or "budgie smugglers" - after Australian Daniel Ricciardo won the Malaysian Grand Prix on Sunday afternoon.

Some of them were also filmed drinking beer from their shoes.

It was widely thought the men would be deported rather than jailed, as the Malaysian government, led by Prime Minister Najib Razak, has been criticised for introducing laws thought to be draconian and designed to crack down on free speech.