Prime Minister John Key has told the UN the conflict in Syria is a byword for failure and the international response has so far failed. 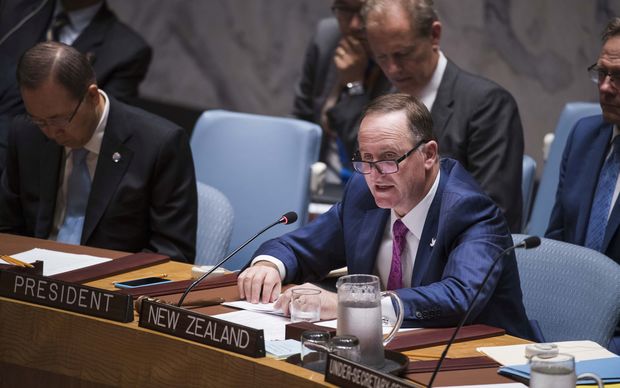 Mr Key chaired a heated Security Council session on Syria in which the US called for all planes to be grounded in key areas of the country to save the truce there, following an attack on an aid convoy.

In the session in New York, US Secretary of State John Kerry said the future of Syria was "hanging by a thread". He said an attack on Monday, which killed 20 civilians, had raised profound doubt over whether Russia and the Syrian government would live up to terms of the ceasefire deal.

Moscow has denied being involved. An impassioned Mr Kerry faced off with Russia's Foreign Minister Sergei Lavrov saying the bombing of the aid convoy raised "profound doubt whether Russia and the Assad regime can or will live up to" ceasefire obligations. Listening to Mr Lavrov made him feel like he was living in a "parallel universe", Mr Kerry said. 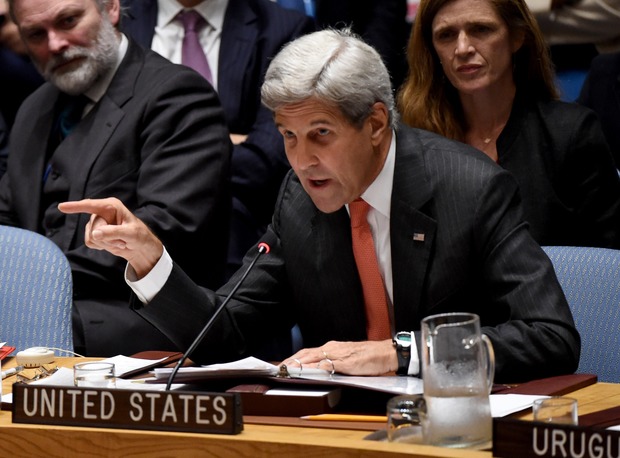 US Secretary of State John Kerry during the Security Council meeting. Photo: AFP

Mr Lavrov, for his part, called for an independent investigation into the convoy attack, and said all parties needed to take simultaneous steps to stop the war.

The Russian defence ministry now says a US strike drone was in the area when the aid convoy was struck.

General Igor Konashenkov did not directly accuse the US of firing on convoy from a drone but pointedly said that such a drone could carry out high-precision strikes against targets on the ground.

Opening the Security Council meeting, Mr Key said the Syrian civil war was the most devastating conflict of the 21st century and no other other issue more urgently demanded the attention of world leaders.

The conflict had created security threats that reach well beyond Syria's borders and after more than five years of violence, Syria had become a byword for failure.

"Failure of the parties and their supporters to put peace, and the lives of innocent people ahead of self-interest and zero-sum politics. Failure to respond to the crisis early to prevent this tragedy. And a collective political failure, including by this Council, to do what must be done to end the conflict.

The problem was not a lack of direction, he said, as the pathway for ending this conflict was set out by the Security Council last December but the timetable for implementing them was never carried out.

"Today we all need to commit to restoring the cessation of hostilities, delivering aid to those who need it, and restarting political talks.

"Last week's arrangement between US Secretary of State Kerry and Russian Foreign Minister Lavrov represents the best hope we have seen in some time.

"We encourage Russia and the US to show sustained leadership and not let this opportunity slip away."

The next few days would be critical in restoring the cessation of hostilities and getting humanitarian aid flowing, he said. "We urge the Syrian parties to abide by the arrangement. This Council should unite to back those efforts."

Mr Kerry said Russia should stand up and take responsibility for air strikes, and British Foreign Minister Boris Johnson all but blamed the bombing of a UN humanitarian convoy near Aleppo on Russia, telling the Security Council they were the only ones with warplanes in the sky.

After the meeting, Mr Key would not be drawn on the comments but said the Council session marked another step along the road to a potential solution, that began with last week's ceasefire agreement.

He said every party involved had a responsibility to put their individual interests aside, and find a solution.

"And if the Security Council and the major participants in this dispute actually can't find a resolution then there's blood on the hands of everybody: the Security Council, the Assad government, those that are perpetrators who are trying to violate the ceasefire."

No formal resolution was agreed on but Mr Key said it was the "starting point, not the ending point" and it was still possible a resolution could be presented by the end of the week.

Latest battles in Syria have been focused in areas that control access to Aleppo city, where the rebel-held east has been besieged by Russian and Iranian-backed pro-government forces and completely encircled for all but a few weeks since July.

Syrian state media said the army had recaptured a fertiliser factory in the Ramousah area to the southwest of the city. The Syrian Observatory for Human Rights, a monitoring body, confirmed the advance and said government forces had pressed forward near an apartment complex nearby.