An explosion in a fashionable suburb of Manhattan has injured at least 29 people, the New York Fire Department says. 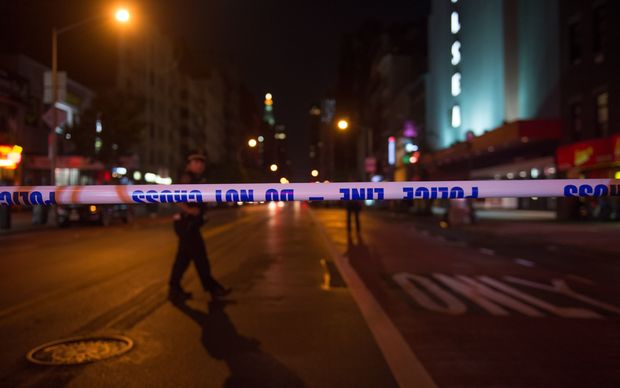 Police walk past police tape on a blocked off road near the site of the explosion on West 23rd Street. Photo: AFP

The New York Fire Department said the blast about 8.30pm was from an explosive device in the fashionable downtown Chelsea district of Manhattan.

The authorities have described the explosion as a deliberate, criminal act, while saying investigators had turned up no evidence of a "terror connection."

Fire Commissioner Daniel Nigro said the blast caused 29 injuries, and none of them were life threatening.

He said 24 of them had been taken to hospitals, including one he described as seriously injured. The rest suffered various cuts, scrapes and other minor injuries from shattered glass and other debris, Mr Nigro said.

New York Police Commissioner James O'Neill said officers who were on patrol and witnessed the explosion outside 131 West 23rd Street.

New York mayor Bill de Blasio and other city officials said investigators had ruled out a natural gas leak as the origin of the blast but they stopped short of calling it a bombing and declined to specify precisely what they believed may have triggered the explosion.

The police commissioner also said the explosion took place on the street, rather than inside a building.

However, CNN quoted police as saying a second device had been found near the site, which appeared to be a pressure cooker with wires attached which was connected to a cellphone. 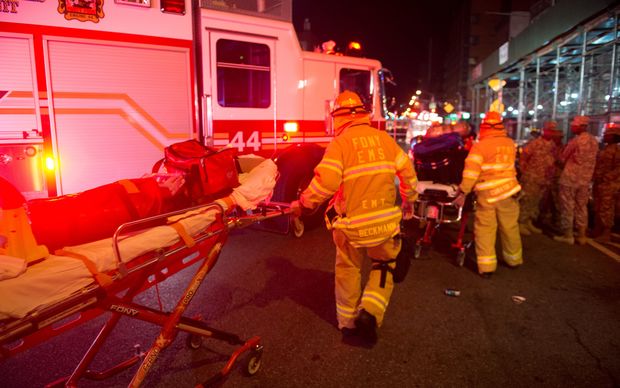 Firefighters help clear the scene of the explosion. Photo: AFP

Police said a sweep of the neighborhood following the blast had turned up a possible "secondary device" four blocks away.

CNN, citing law enforcement sources, reported that the device appeared to be a pressure cooker with wires attached to it and connected to what resembled a cell phone. A piece of paper with writing on it was found nearby, CNN reported.

Pressure cookers packed with explosives and detonated with timing devices were used by two Massachusetts brothers in the 2013 Boston Marathon bombing that killed three people and wounded more than 260.

This is the device found at second location, near New York explosion, officials say. https://t.co/cpgJgDr4X5 pic.twitter.com/TZr07KwDra

Police said the second device had been removed safely.

"Early indications are that this was an intentional act," Mr de Blasio said. He added that the site of the explosion, outside on a major thoroughfare in one of the most bustling areas of New York City, was being treated as a crime scene.

"There is no evidence at this point of a terror connection," the mayor said at a news conference about three hours after the blast.

"There is no specific and credible threat against New York City at this point in time from any terror organization," he added.

At least three people were seen being taken away from the scene of the blast in ambulances, but the severity of their injuries was not immediately clear. A car seen driving through the area had its rear window blown out.

The explosion, described by one neighbour as "deafening", happened outside the Associated Blind Housing facility at 135 W. 23rd Street. The facility provides housing, training and other services for the blind. 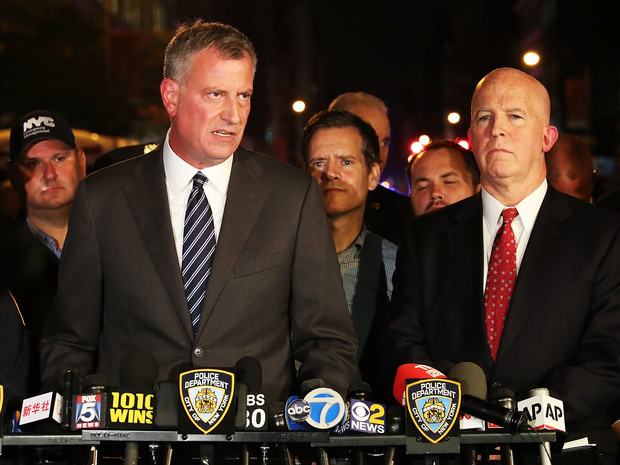 Hundreds of people were seen fleeing down the block on a cool early autumn evening, as police cordoned off the area.

"It was really loud, it hurt my eardrums. My 10-year-old boy was sat in the back seat of the car, and the explosion blew the back window out," said Tsi Tsi Mallett, who was driving along 23rd Street when the explosion took place. Her son was not injured.

Neha Jain, 24, who lives in the neighborhood, said she was sitting in her room watching a movie when she suddenly heard a huge boom and everything shook.

"Pictures on my wall fell, the window curtain came flying as if there was a big gush of wind. Then we could smell smoke. Went downstairs to see what happened and firemen immediately told us to go back." 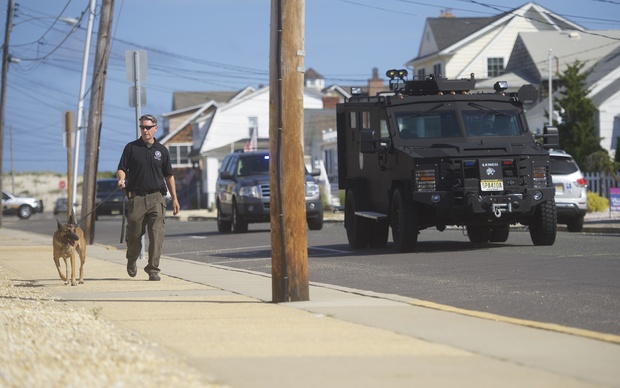 Police patrol near the site of a "pipe bomb-style device" explosion along a running race route in New Jersey. Photo: AFP

Meanwhile, a pipe bomb has exploded in the neighbouring state of New Jersey, on the route of a road running race.

Mayor de Blasio said investigators did not believe there was any link to a pipe bomb that exploded earlier on Saturday in the New Jersey beach town of Seaside Park.

No injuries were reported in that blast, in a plastic trash can along the route of a charity foot race. Authorities said they believed it to be a deliberate act.

A law enforcement source said an initial investigation suggested the Chelsea explosion occurred in a dumpster but the cause was still undetermined. The head of the New York Police Department's special operations division said on Twitter that a "possible secondary device has been located" in the same general area.

The bomb had been placed in a rubbish bin along the route of the Semper Five 5km run.

The explosion forced the event to be cancelled but did not cause any injuries.

The participants would have been in the area but the race had been delayed because of an unattended bag.