Donald Trump, the main supporter of false claims about Barack Obama's birthplace, has finally said he accepts that the President was born in the US, "period". 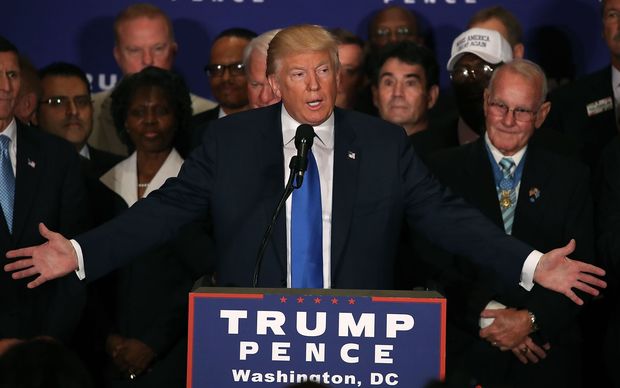 The "birther" movement had questioned Hawaii-born Mr Obama's citizenship and therefore his eligibility as president.

Mrs Clinton said Mr Trump had founded his campaign on "this outrageous lie".

Mr Trump said at a campaign event in Washington: "President Barack Obama was born in the United States, period.

There is no evidence to link Mrs Clinton to the birthers.

Mr Trump's campaign team had earlier also said it was Mrs Clinton's team who had started the rumours in 2008.

Senior Trump adviser Jason Miller said that Mr Trump had brought "this ugly incident to its conclusion" in 2011 by forcing Mr Obama to release his birth certificate.

However, Mr Trump had tweeted in 2012 that an "extremely creditable source" had told his office the certificate was a fraud.

He was also still refusing to say that Mr Obama had been born in Hawaii when questioned on the issue during a Washington Post interview on Thursday.

Analysts said that although the birther issue has not been a major one in this campaign, it continues to rankle with African-Americans, who see it as an attempt to challenge the legitimacy of the country's first black president.

Their vote has been solidly behind Mrs Clinton in opinion polls and Mr Trump needs to court it.

Mrs Clinton also addressed the issue in a speech in Washington, just ahead of Mr Trump's.

She said Mr Trump had led the birther movement for five years and had founded his campaign on "this outrageous lie". "There is no erasing it," she said.

This shouldn't have to be said: You don’t just get to say someone else did the worst things you’ve done. It doesn’t work. No one buys it.

"Imagine a person in the Oval Office who traffics in conspiracy theories - who distorts the truth to fit a very narrow view of the world.

"We cannot become insensitive to what he stirs up - we've got to stand up to it. If we don't, it won't stop."

After his speech, Mrs Clinton tweeted: "What Trump just did is a disgrace. What Trump should do for once in his life, own up to his mistakes."

Trump has spent years peddling a racist conspiracy aimed at undermining the first African American president. He can't just take it back.

What is the origin of the 'birther' claim?

The claim is a conspiracy theory that Mr Obama was actually born in Kenya and is therefore ineligible to be president.

Reports in various US publications suggest it was circulated in 2008 by die-hard supporters of Mrs Clinton as it became clear that she was not going to win the Democratic nomination.

However there is no evidence that Mrs Clinton or her then campaign had anything to do with it.

The claim enjoyed a revival with some supporters of Republican candidate John McCain as he fell behind Mr Obama in polls, the Fact Check website reported.

When did Mr Trump get involved?

The billionaire became a vocal questioner of Mr Obama's citizenship as he was running for a second term as president.

The 2012 Republican candidate Mitt Romney referred to the discredited theory at a campaign rally in August that year, joking that no-one had asked to see his birth certificate - drawing swift condemnation from the Obama campaign.