Pauline Hanson has heralded her political comeback by warning Australia is at risk of being "swamped by Muslims" and telling those who are unwilling to adapt to the Australian way of life to "go back to where you came from". 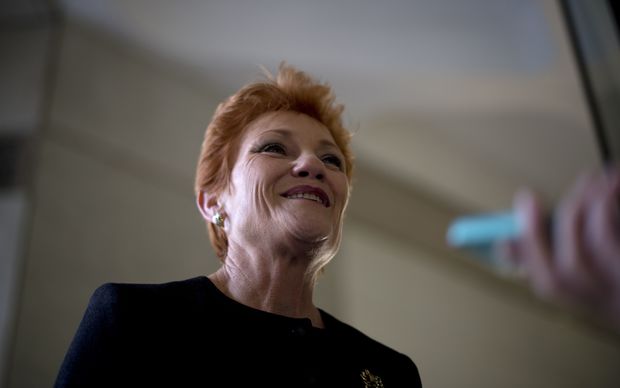 Referencing her maiden speech to Parliament in 1996, in which she made the same claim about Asians, the One Nation senator repeated her call for a ban on Muslim immigration and warned Australians would eventually be forced to live under sharia law, if something did not change.

"We are in danger of being swamped by Muslims who bear a culture and ideology that is incompatible with our own," she said.

Senator Hanson claimed "indiscriminate immigration and aggressive multiculturalism" had caused crime to escalate and social cohesion to decline, and said too many Australians were now afraid to walk alone in their neighbourhoods at night.

"Islam cannot have a significant presence in Australia if we are to live in an open, secular and cohesive society," she said.

"We have seen the destruction it is causing around the world."

At one stage during her speech, Greens senators staged a walk out.

Our @Greens MPs on tonight's events. Racism has no place in Australia. #auspol (Captions https://t.co/Iwm79dJv4C) pic.twitter.com/goNmr8tIJC

"Together, our MPs have left Senator Pauline Hanson's first speech because we'll call out racism wherever it occurs, including Parliament," Senator Di Natale tweeted.

"Racism has no place in Parliament but that is what we have just heard from Senator Hanson. I stand with those people hurt by her words," a second tweet read.

Nearly 20 years to the day after she delivered her first speech to Parliament, Senator Hanson declared "she's back" and said she and her three One Nation colleagues would make a difference.

"It has taken numerous elections, countless legal battles and doing a stint in maximum security on trumped up charges ... to find myself here," she said.

The right-wing anti-immigration campaigner also used her speech to outline her party's other policies, including banning the burqa in public places and cracking down on welfare, particularly for mothers who choose to have more than one child.

The party also wants to introduce a National Identity Card for Australians who access taxpayer-funded services and revoke any free trade agreements that are not in Australia's interests.

"To categorise parts of our community - Islamic Australians, Muslim Australians - basically vilifying them in that way was just heartbreaking," he said.

"This is not what Australia's all about. We're an open and inclusive country and Pauline Hanson is wrong when she says Islam and democracy aren't compatible.

"Just north to our border is the world's biggest Muslim country, Indonesia, which happens to be one of the most robust democracies in the world."

Former prime minister John Howard told TV show Lateline that Senator Hanson was "entitled to be treated in a respectful fashion by the rest of the Parliament".

In response to the Greens walking out, Mr Howard said: "I think that reflects poorly on them".

He told 774 ABC Melbourne earlier that it would be a mistake to generalise Ms Hanson and her supporters as bigots.

"When I was in politics I always thought it was a mistake and it was inaccurate and it was unfair to brand her supporters as racist and it remains my view, and I don't think anything is gained by those allegations," he said.

Mr Howard said the Parliament should deal with the newly elected senator on the merits of individual issues.

"When she was wrong I said so and when she wasn't wrong I didn't say anything," he said.