The latest iPhone 7 from Apple will not have a traditional headphone socket, with users encouraged to use unique wireless earphones instead. 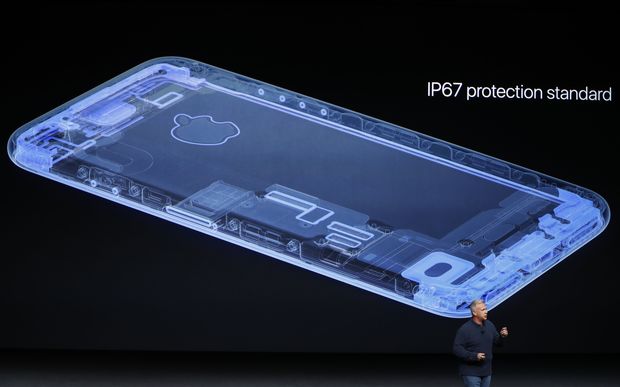 The US company has unveiled the iPhone 7 at an event in San Francisco, after a year in which its phone sales shrank.

The most noticable difference is the lack of a headphone socket, which could be used with any standard headphones.

Apple said its lightning connector could be used instead, which would make room for other components. It will also promote the use of wireless earphones, and has released a set of its own called Airpods.

The firm said it had taken "courage" to take the step.

However, it now risked annoying users who would now require an adapter for existing headphones.

Other new features include:

The launch comes a week after the European Commission demanded Apple pay up to €13 billion in back taxes to Ireland - a ruling the firm is appealing.

"The current difficulties with the EU will have little bearing towards the iPhone 7 at this juncture," predicted Ben Wood from the CCS Insight consultancy.

"But the dispute will drag on for years, and if sentiment turns against Apple that could have major implications for the brand.

"For now, there's a strong argument that the iPhone 7 is more than an iterative update.

"Upgrades are all important to Apple and for consumers coming from an iPhone 5S or iPhone 6, the iPhone 7 will feel like a considerable step up." 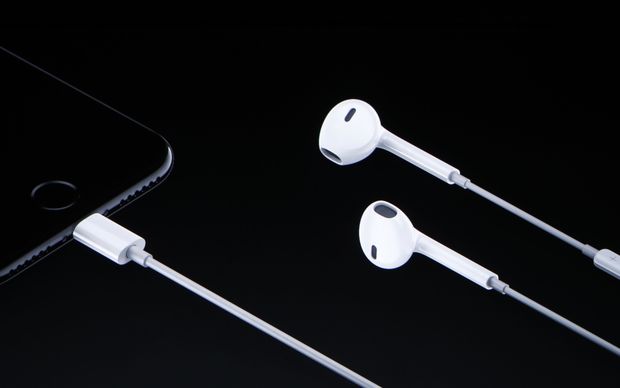 The new headphones and jack for the iPhone 7 from Apple. Photo: AFP

The 3.5mm headphone jack was made popular by Sony's Walkman cassette players, but was first introduced in one of the Japanese company's transistor radios in 1964.

Apple has repeatedly been willing to ditch connectors and other ageing tech from its products earlier than its rivals.

But one expert questioned the benefit of the latest move.

"If you've been interested purely in the audio quality then a wired connection has always been best," said Simon Lucas, editor of What Hi-fi magazine.

"You have greater stability - there's no possibility of drop-outs. Wireless headphones also need to be charged, and the louder you listen to them the quicker they will run out of power.

"With regards to headphones with a lightning connector, there's only about eight pairs currently available and they will all have had to pay Apple a licence to use its proprietary connector."

Apple, however, suggests there are advantages to using its Airpods, which will cost $US159 ($US213).

It demonstrated that the wireless headphones could be paired with the phone much more quickly than is normally the case with Bluetooth sets.

The Airpods also contain infrared sensors to detect when they are in the user's ears. This allows them to automatically stop music from playing when they are taken out.

Motion sensors in the buds also allow the firm's virtual assistant Siri to be activated for voice commands by double-tapping their sides.

Users will, however, have to get used to charging another device.

Apple said the Airpods would last "up to five hours" on a charge, and come with a recharging case that can extend their life up to 24 hours before a plug socket is required.

Another related change is the introduction of stereo speakers - one at each end of the handset - which Apple said meant the iPhone 7 could deliver twice the volume of the iPhone 6S.

One company watcher said removing the 3.5mm socket would still annoy some users, but added that their frustration might be short-lived.

"Apple changed the charger port a few years ago and people got upset," said Francisco Jeronimo from the research firm IDC.

"But it didn't stop people from buying the iPhone.

"Removing the headphone jack won't either.

"What's more important is whether a consumer likes Apple's ecosystem or Android's, because at this point Windows and Blackberry phones have an extremely low market share."

The iPhone 7 Plus has both a wide angle and telephoto lens on its back, both using the same 12 megapixel sensor.

This allows the owner to quickly switch to a tighter shot without sacrificing image quality, and also allows the device to offer 10x zoom - double the amount than before - by digitally cropping the photo in the camera app.

A similar feature is already available on LG's G5 phone.

But Apple says it will also use the component to simulate an effect associated with larger DSLR cameras.

The phone's software will be able to automatically pick people's faces out from the background, keeping the humans in focus while blurring the rest of the shot.

The feature will not, however, be available at launch but will rather be provided as an update later on.

Apple also unveiled a new version of its smartwatch, which it described as the "ultimate fitness device", and revealed that a Super Mario game would appear in the franchise's first iPhone video game before the end of the year.