Donald Trump has been endorsed by 88 former military leaders in an open letter, according to his campaign. 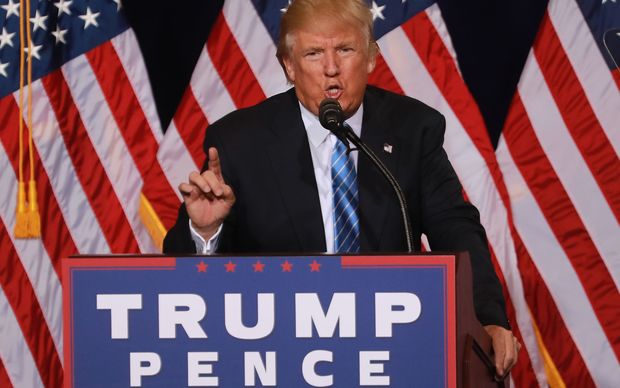 Donald Trump said it was a "great honour" to have the support of former military leaders. Photo: AFP

The group of retired generals and admirals declared the Republican nominee "has the temperament to be commander-in-chief".

Mr Trump, who has highlighted veterans' issues during his campaign, called their support "a great honour".

He has meanwhile been dismissing claims of impropriety over a political donation to a Florida official.

The Washington Post reported on Monday that in 2013 Florida Attorney General Pam Bondi had been considering fraud charges against Trump University.

But she dropped the investigation after a $US25,000 contribution to her political campaign from the Donald J Trump Foundation.

Mr Trump was fined because he did not disclose the contribution to the US tax authorities.

The letter released on Tuesday by his campaign was signed by four 4-star generals.

The former top brass stated they believe Mr Trump is "more trusted to be commander-in-chief than (Democratic nominee) Hillary Clinton".

"We believe that such a change can only be made by someone who has not been deeply involved with, and substantially responsible for, the hollowing out of our military and the burgeoning threats facing our country around the world," they added.

Both Mr Trump and Mrs Clinton will take part back-to-back in a national security forum on Wednesday.

The forum, to be hosted by the Iraq and Afghanistan Veterans of America, will include questions from an audience of military service members.

Arizona Senator McCain was tortured for more than five years as a prisoner of the North Vietnamese.

Despite making support for the military a signature issue in his campaign, Mr Trump has at various times drawn criticism from military members.

Most notably, he was involved in a recent spat with family members of a Muslim-American soldier killed during the Iraq War.

Mr Trump, who has not served in the military, also created a stir last month when he accepted a veteran's gift of a Purple Heart.

"I always wanted to get the Purple Heart," he said of the medal, which is awarded to soldiers wounded in war.

"This was much easier."