Nile crocodiles are aggressive, deadly predators, and a lucrative industry has sprung up in Kenya to farm them, reports BBC business reporter Charles Njeru. 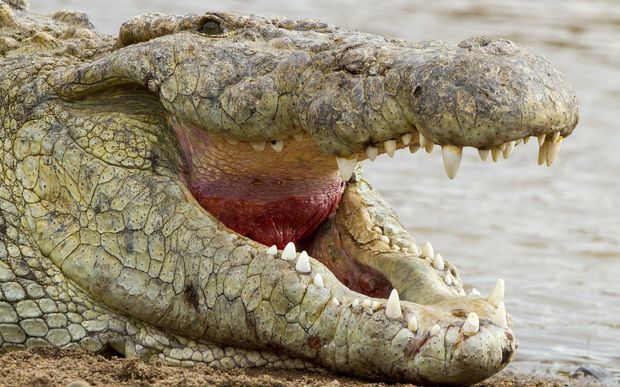 Nile crocodiles grow to 5m in length, weigh about 750kg, and are known for their aggression. Photo: AFP

If you are working in an enclosure full of crocodiles, don't turn your back on them to answer your mobile phone.

Sadly that is what one member of staff did in May at Collins Mueke's crocodile farm in eastern Kenya.

Crocodile farming has its challenges, but the most surprising result is the profits.

"He was talking on his phone not aware of his surroundings," says Mr Mueke, 62. "He died while getting treatment in hospital.

"Another worker lost his index finger while handling a young crocodile just a few weeks old. It can be a scary place here, but you have to move on and earn a living."

Welcome to the lucrative, but dangerous, world of crocodile farming.

If you are of a nervous disposition, you probably wouldn't consider farming Nile crocodiles.

The largest species of African crocodile, it is one of the world's most deadly predators.

Growing to 5m in length, and typically weighing as much as 750kg, it is renowned for its aggressive nature.

In the wild attacks on humans are commonplace. While exact figures are not available due to incidents going unreported, the Nile crocodile is said to kill hundreds of people in Africa every year. 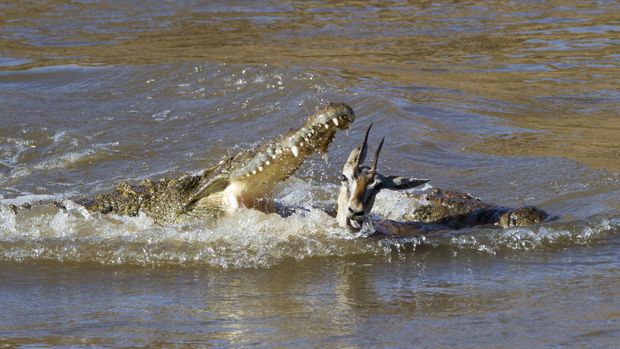 A Nile crocodile catching a gazelle in the wild in Masai Mara, Kenya Photo: AFP

Mr Mueke has more than 33,000 of the crocodiles at his 300-acre facility in Kitui County, some 180km east of the capital Nairobi.

Led by demand for crocodile meat from China, but also rising domestic sales to the restaurants of upmarket tourist hotels, he says that business has never been better.

The meat is white in colour, and said to taste similar to chicken.

Mr Mueke says that he can also sell their hides the animals for 2500 Kenyan shillings, which go on to become shoes, handbags and belts.

The financial result of all this, Mr Mueke says, is that he can double his money for each of the 3000 crocodiles he slaughters every year.

"Crocodile farming has its challenges, but the most surprising result is the profits. You can make more than 100 percent," he says.

They are fed with fish and other meats, and blood-soaked maize. 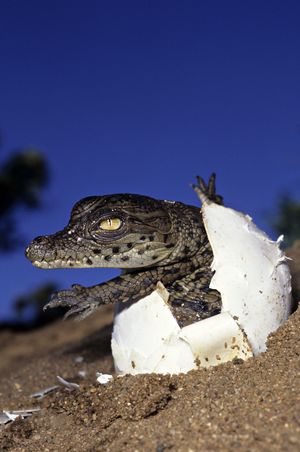 A Nile crocodile breaking out of its egg Photo: AFP

The enclosures have steep walls to prevent the crocodiles from escaping.

The farm's 246 workers have to climb down into them on a daily basis to trap and kill crocodiles that have reached the ideal age for eating - eight years old.

Staff also collect eggs so that baby crocodiles can be hatched and reared in separate enclosures, and do general cleaning work.

"You have to observe the crocodiles daily for diseases and even injury," he says.

"An injury to a crocodile through infighting among the populations can cause serious fatal diseases and instant death.

"But the biggest disease a farmer must avoid among crocodiles is crocodile pox. It has no vaccine, and can wipe out the whole stock.

"So the best thing to do about this is always observe good hygiene."

The crocodile farming sector is now growing at 22 percent per year across Africa, according to industry estimates.

Almost 85 percent of exports go to China, Hong Kong and Taiwan combined. The next biggest export market is the wider Middle East region.

In Kenya there are now 21 crocodile farmers, but a further 60 have applied for the required licences, according to the Kenya Wildlife Service (KWS).

KWS spokesman Paul Gathitu says it has no problem with the farming of Nile crocodiles because the animals are not endangered.

Yet Mr Ojamong cautions that the start-up costs are onerous. He estimates that to set up a crocodile farm in Kenya you would need about $500,000 to cover everything from land purchases, consultancy fees for experts in the field, and securing your crocodile breeding stock.

Mr Mueke, who established his farm more than a decade ago, says: "There are a lot of expensive infrastructure requirements... but the returns you get will make you not regret [the initial outlay]."