A man has been charged with murder, attempted murder and animal cruelty over a stabbing attack at a north Queensland backpackers' hostel. 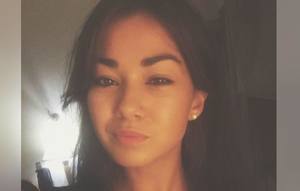 Mia Ayliffe-Chung, 21, from Derbyshire in the UK, was stabbed to death in front of about 30 people at Shelley's Backpackers in Home Hill, south of Townsville, on Tuesday, the ABC reported.

Tom Jackson, a 30-year-old British man who came to her aid, received critical head injuries, and a hostel employee was also stabbed.

A dog was also killed.

French national Smail Ayad, 29, who was thought to be living with the victims at the hostel, has been charged with one count of murder, two counts of attempted murder, one count of serious animal cruelty and 12 counts of assaulting police officers.

It had been alleged the attacker used the Arabic phrase "Allahu akbar" but police had so far ruled out links to terrorism.

Mr Ayad was taken to hospital on Wednesday with non-life-threatening injuries.

When he was released into custody on Wednesday, he allegedly assaulted two officers and violently resisted until a Taser and pepper spray were used to subdue him.

"There are a number of issues in relation to officer and public safety," he said. "His demeanour remains unchanged."

Mr Jackson's father was expected to arrive in Townsville tonight.

Miss Ayliffe-Chung had lived in Surfers Paradise, on Australia's Gold Coast, and worked as a waitress at the Bedroom Lounge Bar before making an 800-mile trip north to work with animals on a farm, the BBC reported.

She was just days into the three-month trip when she was killed.

Her family paid tribute to an "amazing young woman with an adventurous spirit".

The statement, on behalf of Mia's mother Rosie Ayliffe, was read out by her partner Stewart Cormack.

He said: "Mia was full of the kind of open-minded compassion for life that you don't see that often. It felt as though she was reminding us all of the beauty and possibilities we each have that we should live life to the full.

"Mia was a rare person who saw beyond race, creed and belief. She would always treat others with dignity, respect and kindness.

"As a peaceful person Mia had huge respect for everybody. She would not want to be the reason for any hostilities caused by any misrepresentations of the events."