The Colombian government and the Revolutionary Armed Forces of Colombia (Farc) have signed a historic peace accord, putting an end to more than five decades of conflict. 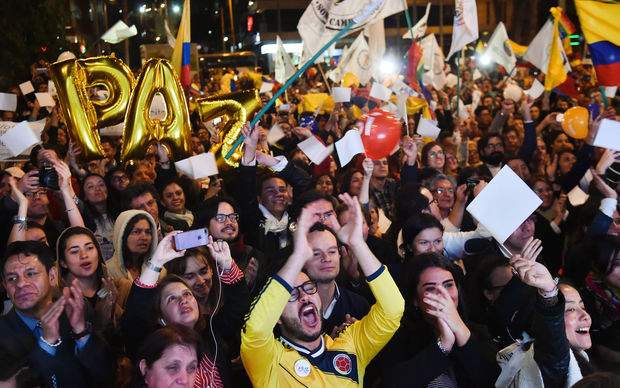 Colombians celebrate as they watch the peace talks, which were broadcast on a big screen, in Bogota. Photo: AFP

Both sides have agreed to work together to address social exclusion, to deliver justice to the victims of the conflict and build a stable and enduring peace.

The announcement was made in the Cuban capital, Havana, where peace talks were launched in November 2012.

The conflict has killed an estimated 220,000 people and displaced millions.

"The Colombian government and the Farc announce that we have reached a final, full and definitive accord," they said in a joint statement.

The head of the Colombian delegation, Humberto de la Calle, and the chief Farc negotiator, Ivan Marquez, signed the agreement at a ceremony in Cuba.

"We have reached our goal," said Mr De la Calle.

"The war is over but also there is also new beginning. This agreement opens the door to a more inclusive society," he added.

The two sides had signed a bilateral ceasefire in June, paving the way for a final agreement.

"It has been a difficult job, with bright and dark moments," said Mr Marquez.

"But we have worked with our hearts. And we can say now it is possible to take our country forward," he added.

US President Barack Obama phoned his Colombian counterpart, Juan Manuel Santos, to congratulate him on the deal.

"The president recognised this historic day as a critical juncture in what will be a long process to fully implement a just and lasting peace agreement that can advance security and prosperity for the Colombian people," said the White House in a statement. 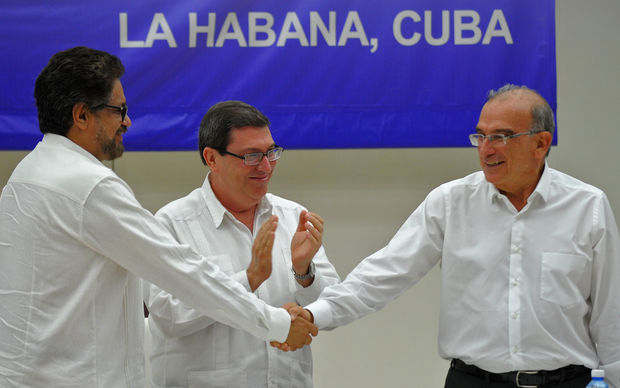 'No winners or losers'

Under the terms of the agreement, the Farc will give up its armed struggle and join the legal political process.

The rebel group has agreed to renounce its armed struggle to join the legal political process.

"There is no room for winners or losers when you achieve peace through negotiations," tweeted Farc negotiator Rodrigo Granda, known as Ricardo Tellez. "Colombia wins, death loses."

Earlier on Wednesday, Farc's leader Timoleon Jimenez, known as Timochenko, had tweeted that "at 6pm in Colombia we will announce the end of the talks and the conclusion of the [peace] accord".

Mr Santos had also promised to give "historic, very important news to the country" later on Wednesday.

The left-wing rebels have been fighting Colombian government since 1964. It is the longest-running conflict in Latin America.

Over the past four years, peace negotiators have managed to reach agreement on six areas: land reform, the Farc's involvement in drug trafficking, justice for the victims, disarmament, future political participation and implementation of the accord.

The deal will need to be approved by Colombians in a popular vote, which will take place on 2 October, Mr Santos announced.

"It will be the most important election of our lives," he said on national television shortly after the deal was signed.

Former President Alvaro Uribe is leading the campaign to get the agreement rejected.