The first Nigerian schoolgirl from Chibok to be rescued from Boko Haram says she misses the father of her baby, a suspected Islamist militant. 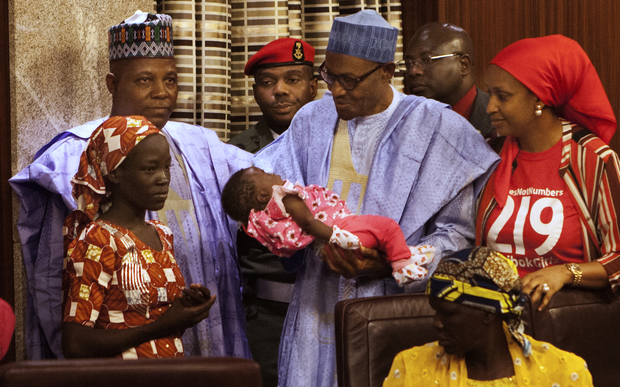 In her first interview since being found with her baby in May, Amina Ali Nkeki told Reuters she also wanted to go home to Chibok, a town in the north.

She and her child are being held in the capital, Abuja, for what the government calls a restoration process.

More than 200 girls were kidnapped from a school in Chibok in April 2014.

The abduction led to the #BringBackOurGirls campaign, that was supported by US First Lady Michelle Obama and Pakistani activist Malala Yousafzai. 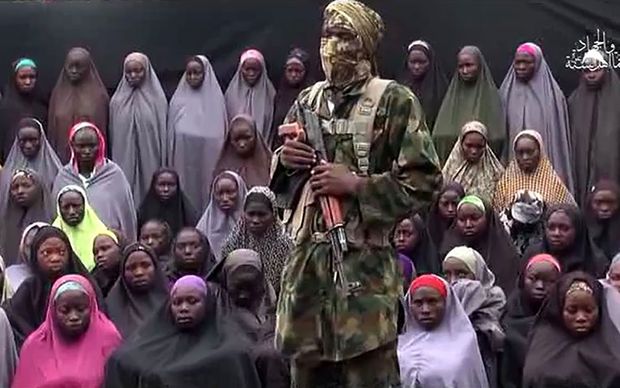 A recent video showed 50 girls alongside a gunman who demanded the release of Boko Haram fighters. Photo: AFP / BOKO HARAM

The Boko Haram group has waged a violent insurgency for several years in north-eastern Nigeria in its quest for Islamic rule.

Ms Nkeki was found three months ago by a vigilante group in a forest with suspected militant Mohammed Hayatu, who identified himself as her husband, and their child of four months.

The 21-year-old said she was unhappy about being separated from Mr Hayatu, who was arrested after they were found.

"I want him to know that I am still thinking about him," she said.

"Just because we got separated, that does not mean that I don't think about him."

During the interview she only lifted her gaze from the floor once to breastfeed her daughter when the baby was brought into the room, Reuters reports.

"I just want to go home - I don't know about school," she said. "I will decide about school when I get back."

Her mother, Binta Ali, said her daughter wanted the government to give her a sewing machine so she could become a seamstress.

She said the man claiming to be her daughter's husband had said he was a mechanic from the town of Mubi before he was captured by Boko Haram - and that he had organised their escape.

Earlier her brother said that because of an increase in air strikes, Mr Hayatu was no longer willing to continue fighting and they had planned to leave together.

Ms Nkeki said she had not watched the video, released by Boko Haram on Sunday, which apparently shows recent footage of some the other missing Chibok girls.

"I think about them a lot - I would tell them to be hopeful and prayerful," she said. "In the same way God rescued me, he will also rescue them."